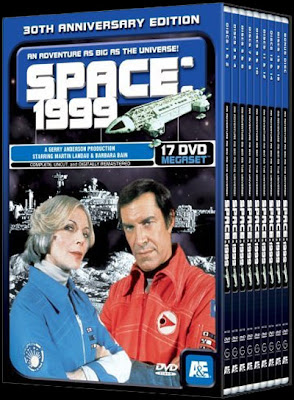 I know that they're the same transfers as the earlier release (and not the restored, remastered ones that UK fans got), and that the only improvement is the new stereo audio tracks -- but I really needed to make some room on my DVD shelves and this new set takes up only about a third of the space that the original A&E sets did. It's not as colorful, but...

I collect a lot of discs, and shelf space is really becoming an issue. Trading in my old discs at a local movie & music store (Bull Moose) and upgrading to the more compact set was one way to help make room for new discs (I recently did the same with my Farscape collection, as well).

Of course, this 30th Anniversary package also contains the bonus disc with the "Message From Moonbase Alpha" short film, still galleries, and the commentary tracks for three of the episodes, and I didn't have it before, so I got a little more out of the deal than just a bit more storage space. And Amazon had it on sale.

And it gives me an excuse to spin the series again. I have to "check the discs" after all. Want to make sure there's no problems or defects, right?
Posted by Christopher Mills at 4:14 AM