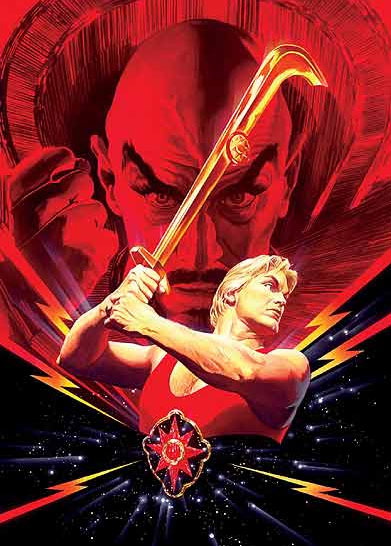 "Flash, Flash, I love you, but we only have fourteen hours to save the Earth!"

I make no apologies or excuses for this: Mike Hodge’s Flash Gordon (1980) is one of my all-time favorite movies. Based on the classic newspaper strip by Alex Raymond, the film is a gleefully silly, joyously tongue-in-cheek interplanetary fantasy that never fails to bring a dopey grin to my face. And now, finally, there’s a home video edition that does the movie justice.

When an unknown force from space threatens the Earth, a pro football quarterback named Flash Gordon (Sam J. Jones, One Man Force, The Highwayman) and a pretty travel agent by the name of Dale Arden (Melody Anderson, Firewalker), find themselves kidnapped by slightly unhinged ex-NASA scientist Hans Zarkov (Topol, For Your Eyes Only), and taken to the alien world of Mongo. There they meet merciless dictator Ming (Max Von Sydow, Needfull Things), who rules the fantastic world with an iron fist, keeping its various kingdoms constantly warring and thus unable to unite against him. Faced with Earth’s imminent destruction, Flash must find a way to bring the tyrant’s enemies together in rebellion and save his home world.

The film story follows the original strip continuity fairly closely, although screenwriter Lorenzo Semple Jr. (1976 King Kong) obviously can’t take the material very seriously. But that’s all right, because this is one film where a tongue-in-cheek approach actually works. Under the guiding hand of versatile British director Mike Hodges (the original Get Carter, Croupier), the colorful, fetishistic fantasy embraces its campy nature and plays out with infectious good humor.

For Flash, the producers assembled a prestigious supporting cast of Brit and Euro thespians that includes a pre-Bond Timothy Dalton, Brian Blessed, Peter Wyngarde, Richard O’Brien, and the gorgeous Ornella Muti, but it’s really Danilo Donati’s set designs and costumes that are the stars of the picture. Blindingly colorful, overly elaborate and utterly decadent, the movie looks exactly like an Alex Raymond or Al Williamson Flash Gordon comic strip come to life. Even the odd choice to get rock gods QUEEN to provide the film’s score works surprisingly well, with their pounding beat giving the film its pulse, electric guitars underlying the excitement of the movie’s various chases and battles.

I saw this film in the theater four times when it was released and have owned it on VHS, laserdisc, and the previously-issued Image DVD, and this 30-year-old production has never, ever looked as good as it does here, on Universal’s "Saviour of the Universe Edition." The studio has given this release an incredibly sharp, perfectly color calibrated, 2.35:1 anamorphic widescreen transfer, newly remastered and restored. The film’s colors have never been so vibrant. Special effects scenes have been cleaned up, removing virtually all of the era’s telltale matte lines and compositing artifacts. Detail is astounding: I’ve seen this movie dozens of times, and yet, there were a number of background elements, objects and sight gags that I had never before noticed until watching this new transfer. The audio has been pumped up, too, with a new Dolby Digital 5.1 mix that finally does justice to QUEEN’s triumphant score and the flick’s innovative sound design.

The extra features are a bit disappointing. One would have hoped for a nice, comprehensive retrospective documentary with cast & crew interviews and behind-the-scenes anecdotes, but the closest we get to that is a brief interview with screenwriter Semple, who admits that he never really read the comic strip before writing the script, and thought the whole enterprise was a lark. Fortunately, this is counterbalanced by an interview with acclaimed comics artist Alex Ross (Marvels, Kingdom Come, etc.), who is, quite possibly, the world’s biggest Flash Gordon fan. He speaks with adult eloquence and adolescent enthusiasm about the film, its impact on him and his art, and the pure joy he derives from it. Ross also provides the new cover art for this edition, and a collectible art card by Ross is included in the package. The disc also includes the original theatrical trailer, the first complete chapter of the 1936 Flash Gordon movie serial with Buster Crabbe, and an amazingly lame promo for the short-lived SciFi Channel Flash television series.

Aside from the (only slightly) underwhelming extras, this is the definitive DVD edition of the beloved cult classic. Highly recommended.
Posted by Christopher Mills at 10:55 PM