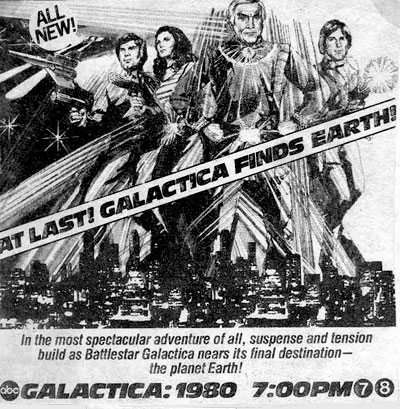 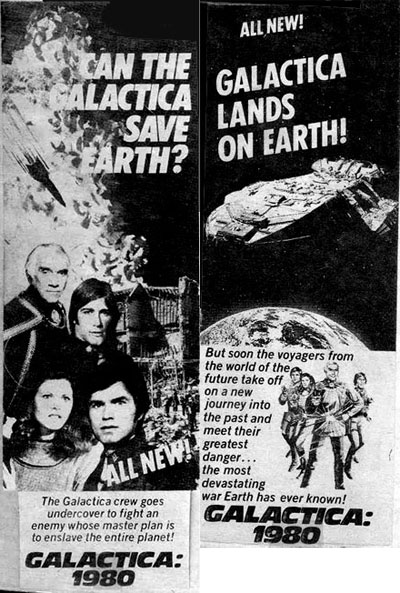 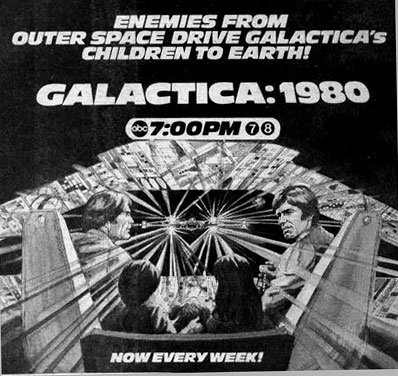 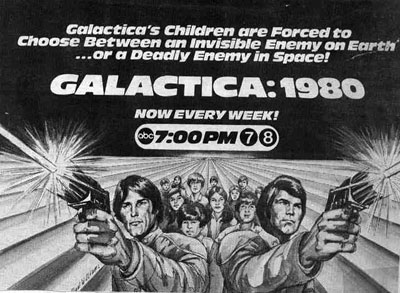 More vintage TV Guide ads, from my collection, for Galactica 1980. Can't say that ABC failed to promote this show, though the ads - as they're supposed to - promise a lot more adventure than the show actually provided.

Seriously, I know that this series is utter crap, and in fact, sinks to whole new depths of sci-fi crapitude, but still... I own it on DVD.

For one thing, I absolutely adored the original Battlestar Galactica when I was a kid and was friggin' traumatized when it was cancelled. I was further traumatized when the low-budgeted, kiddie-oriented spin-off, Galactica 1980 came about, because I missed damn near every episode! I never saw the three-part premiere (although I did eventually rent the truncated "movie version" on VHS) and only caught the ends of the next few episodes because my family never seemed to be home at 7:00 on Sunday nights.

I do remember seeing the Halloween episode (or the first part of the two-parter), "The Night The Cylons Landed," which introduced human-looking Cylons (long before the new series) and guest starred Wolfman Jack. My folks were visiting friends and to keep me occupied, I was sent into their rec room to watch TV.

But I never saw the final and best episode, "The Return of Starbuck," until Goodtimes Home Video released it on budget videotape in the mid-80's.

I did manage to clip and save these ads, though. Gotta admit, too, that I love seeing Lorne Greene posed like Superman in that first ad!
Posted by Christopher Mills at 9:59 PM