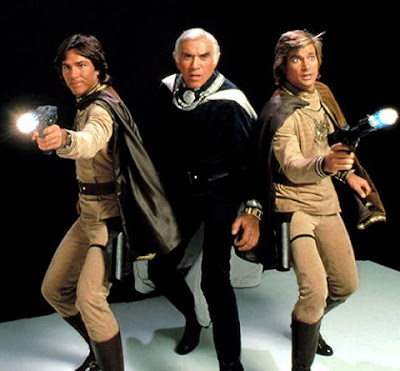 My wife and I were talking this evening as we prepared to eat dinner, and for some reason, the recent Battlestar Galactica remake came up. My wife expressed how disappointed she'd been at the end of the series because by that point, she no longer liked any of the characters. In fact, she so disliked them, that she no longer cared about their fates.

I agreed. And it got me thinking that while the new Galactica may have been a "better" show than the original in most quantifiable ways - arguably better overall production values and effects, more naturalistic acting and more sophisticated writing - and I liked the show okay, I still like the original, 1978 Battlestar Galactica better. Always did. And now I thought I could put my reasons into words.

As I told my wife, the old show may have had plots recycled from old war movies and Westerns, and the dialogue may have been frequently corny, but the characters were more likable. And not only that, they were in exactly the same situation as their 21st century SciFi Channel doppelgangers - their entire civilization had been wiped out, they were at the mercy of a hostile universe and omnipresent threat from the Cylons - but unlike the more "realistic" characters of the remake, the original Adama, Apollo, Starbuck, et al, stood up.

They faced their problems and enemies with a unwavering faith in the strength of the human spirit, and confidence that they would ultimately survive, thrive, and find their place in the universe -- Earth. They believed in - and relied on - family, duty, and their faith. They didn't backstab each other and wallow in self pity. They fought for their survival, and never considered surrender. 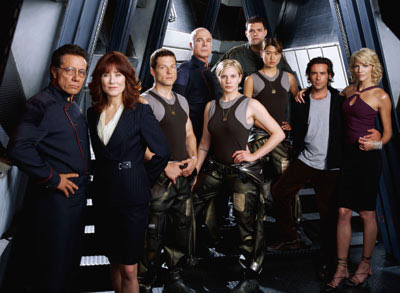 I know that in this day and age (ironically, the very future I used to look forward to back in the 70s), heroism is considered obsolete. We're all in this life for ourselves, and everyone else be damned. And if we believe we're right about something, we'll tear down anyone with an opposing view, rather than try and find a mutually-acceptable middle ground. We isolate ourselves from community, and sneer with cynicism at the idea of "good guys" and "bad guys." We know that there's no such thing - just varying degrees of self-interest.

The Colonial survivors of the original Galactica didn't always get along, either. There was corruption and conflict, and differences of opinion about how the fleet should be governed. That Council of Twelve was a right pain in the ass. There was loss - Zack, Serena, the Pegasus (maybe). But... the main characters never gave up hope.

Was it realistic? Well, not in the modern view, I suppose. But it was actually a pretty nice idea, wasn't it? That there was always hope?

That's probably why I love these old shows so much. The original Star Trek, Galactica, Buck Rogers - even Space: 1999. They all showed human beings as standing up to the immensity of a malevolent cosmos and facing it down with dignity and courage. No matter how often the Colonial Warriors got their asses kicked by superior Cylon numbers (or Moonbase Alpha found itself completely at the mercy of super powerful aliens), they kept on fighting.

It's a damned shame that nobility, dignity and heroism seems to have gone out of style, both in our science fiction and our world....
Posted by Christopher Mills at 1:31 AM