I've often written about how 70s sci-fi and disco music are intertwined in my mind thanks to artists like Meco, Giorgio Moroder and Geoff Love and their dance arrangements of film and TV scores by John Williams, Stu Phillips, Jerry Goldsmith and others. Most successful of these, of course, was Meco's Star Wars & Other Galactic Funk LP which became a huge club and radio hit. 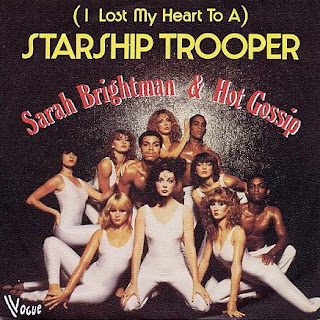 There was more to the sci-fi/disco connection than just re-arranged movie themes, though. In England in 1978, the disco dance troupe Hot Gossip recorded and released their only bona fide hit, I Lost My Heart To A Starship Trooper, with lead vocals by future West End/Broadway star Sarah Brightman.

An anonymous Star Kid sent me the link to this YouTube video today, and rather than bury it in the comments section of an unrelated post, I thought I'd embed the video here as its own blog entry - mostly because I really like this song and wanted to be able to find it quickly myself. Enjoy!
Posted by Christopher Mills at 3:43 PM