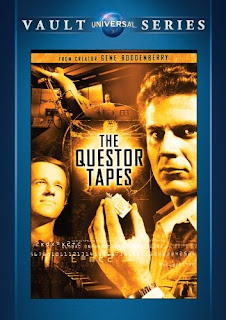 As a follow-up to Wednesday's "Behind-The-Scenes" post, Star Kid Don Hilliard informs me that Gene Roddenberry's TV movie/unsold series pilot, The Questor Tapes, is actually available commercially, as a Manufactured-On-Demand DVD from Universal's "Vault Series" and Amazon. I'm not sure how timely this news actually is, because I have no idea how long Universal's been offering the disc - unlike Warner Archive, they don't seem to aggressively promote their MOD offerings.

Needless to say, I'll be ordering a copy as soon as finances permit, and will make a point of reviewing it here on the site.

The Questor Tapes was one of Roddenberry's several attempts to launch a genre follow-up to Star Trek in the Seventies (others include Spectre, Genesis II and Planet Earth).  Written by Roddenberry and his Trek cohort Gene Coon, Questor recounted the origin of an advanced android (Robert Foxworth) on the run from the government and searching for the scientist that built him. He's aided in his search by another scientist, Jerry Robinson (Mike Farrell). Directed by Richard A. Colla (director of the Battlestar Galactica pilot, as well as the TV movie, The UFO Incident), the cast included Trek veterans Majel Barrett and Walter Koenig in supporting roles. (Another Trek alumni, D.C. Fontana, penned the paperback novelization.)

As I mentioned in the previous post, this is the only one of Roddenberry's 70s sci-fi pilots I haven't yet seen. With luck, I'll be correcting that oversight soon.

Buy at Amazon: The Questor Tapes

Posted by Christopher Mills at 4:13 AM