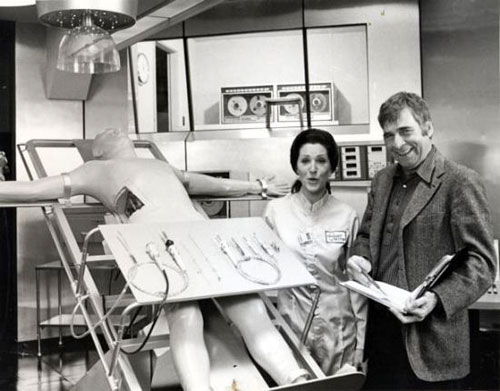 Actress Majel Barret and her husband, producer Gene Roddenberry, pose on the set of Roddenberry's 1974 TV movie/pilot film, The Questor Tapes. The telefilm starred Robert Foxworth as the highly advanced android, Questor, and Mike Farrell as the human scientist helping the 'droid search for his missing creator. Barret had a supporting role as another scientist in the film.

Although I have - and have read - D.C. Fontana's novelization of the teleplay, this is the one Seventies Roddenberry production that has continued to elude me. I didn't catch it when it was originally broadcast, and have never managed to catch it on television or home video in the past 38 years or so. Hopefully, one of these days, I'll get my hands on a copy.
Posted by Christopher Mills at 2:51 AM