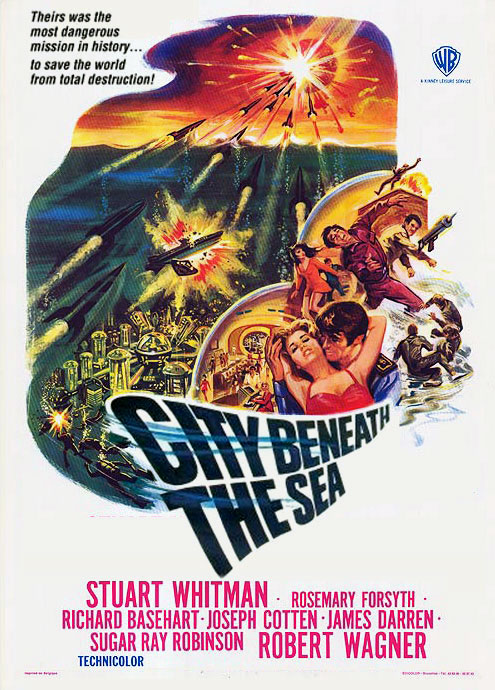 It's kind of interesting that the producer who dominated sci-fi television programming in the Sixties couldn't seem to get a genre show on the air in the following decade. Prolific producer Irwin Allen, whose creations Lost In Space, Voyage To The Bottom Of The Sea, Time Tunnel, and Land Of The Giants were staples of late-60s network TV, found his particular brand of genre fare out of step in the 1970s. Like Gene Roddenberry, he pitched a few sci-fi pilots that aired as TV movies, but none of them went to series. Among these failed attempts were 1976's Time Travelers, 1978's The Amazing Captain Nemo, and 1971's City Beneath The Sea.

Stuart Whitman is Admiral Michael Matthews, who is ordered by the President of the United States to retake command of Pacifica, a large, underwater scientific research facility. Upon his arrival at the city beneath the sea, he is besieged by crises, including sabotage, espionage, various disgruntled colleagues, and a rogue comet that is going to collide with Earth right above his sub-oceanic seabase! In addition, Pacifica is in the process of receiving the U.S.' entire gold reserve from Fort Knox (shipped by rocket!) and a group of thieves (including Matthews' own brother - played by Robert Wagner) have an elaborate scheme in place for stealing all of it! 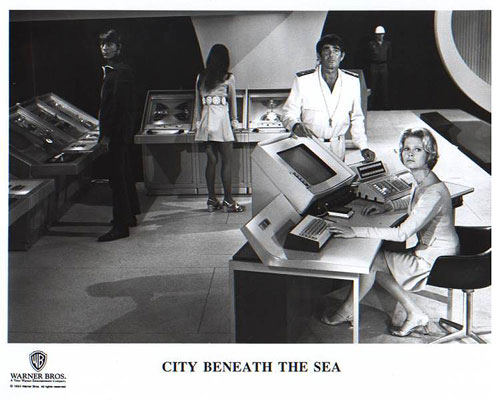 City Beneath The Sea is vintage Allen, with the same Cold War-tinged plotting, colorful production design, and Old School miniature effects that had been the hallmarks of his 60s productions; in fact, he re-used some of the models and sets from his earlier shows (most notably, Voyage To The Bottom Of The Sea's "flying sub"). A lot of familiar faces from those shows appear, too - James Darren, Robert Colbert  and Whit Bissell from Time Tunnel and Richard Basehart from Voyage, among others.

I don't recall seeing City Beneath The Sea on television in '71 (I was only six), nor did I catch it on TV in the years between then and now. Fortunately for me, it is available as part of the Warner Archive Collection, both as a manufactured-on-demand DVD and on their online streaming service, which is where I finally caught up with it. I enjoyed it considerably (as you probably guessed), but then, I'm a big fan of the Voyage to The Bottom Of The Sea series and Allen's other 60s shows. I'll definitely be adding the DVD to my 70s sci-fi library one of these days.

As for Irwin Allen, he may not have sold City Beneath The Sea as a weekly series, but he continued to do pretty well as a producer of theatrical films (and TV movies) during the decade, becoming the king of 70s disaster epics, with such hits as The Poseidon Adventure, The Towering Inferno, The Swarm, and others.
Posted by Christopher Mills at 11:43 AM

Email ThisBlogThis!Share to TwitterShare to FacebookShare to Pinterest
Labels: 1971, City Beneath The Sea, TV