Behind-The-Scenes Pix #24: LAND OF THE LOST 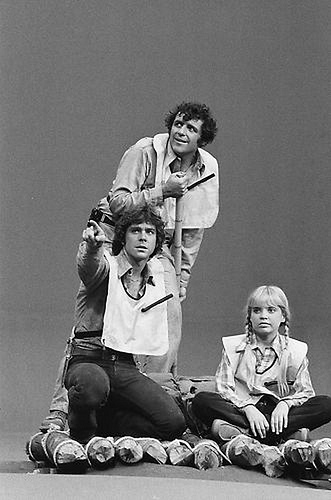 One show that I originally intended to write about here at Space: 1970 a lot more than I have (especially, as I haven't written about it yet, really) is the 1974-76 Saturday morning children's adventure series, Land Of The Lost. During its three-season run, it was probably the most imaginative sci-fi show on television, and certainly the one with the most special effects per episode.

I really need to start giving this show some of the attention that it deserves.

This cast shot certainly demonstrates just how extensively the show relied on chroma-key/bluescreen compositing. Series stars Spencer Milligan (as Rick Marshall), Wesley Eure (as Will Marshall) and Kathy Coleman (as Holly Marshall) pretend to navigate their raft down a river - a miniature river and landscape that would be shot seperately and matted in behind them for airing.

I have to say, though, looking at their expressions (especially Milligan's and Coleman's) makes me wonder what they thought they were supposed to be seeing...
Posted by Christopher Mills at 2:52 AM

Email ThisBlogThis!Share to TwitterShare to FacebookShare to Pinterest
Labels: 1974, Behind-The-Scenes, Land Of The Lost, Lost Worlds