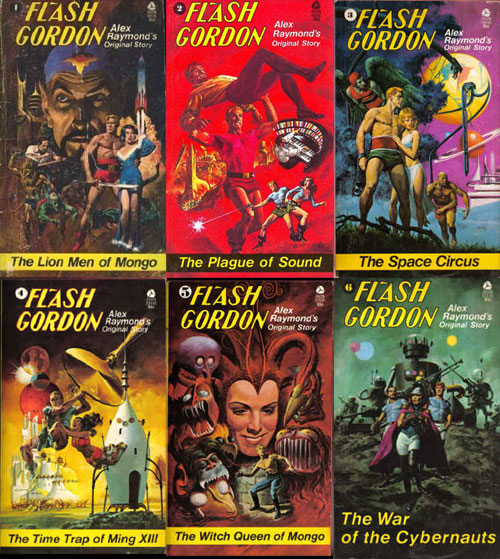 In 1974, Avon Books published a half-dozen Flash Gordon novels by "Con Steffanson," a pseudonym of noted science fiction author Ron Goulart. This was part of a publishing program that also included paperback adventure novels chronicling the exploits of King Features' other comic strip heroes, The Phantom and Mandrake The Magician, playing into the wave of nostalgia for Thirties & Forties pop culture that was around at the time.

Unlike the David Hagberg Flash Gordon novels that Tempo Books would publish about a half-decade later, these six volumes followed the continuity and characterizations of the original comic strips fairly closely, with half of the books set on Mongo. The other three, on the other hand, harkened more to the 50s and 60s version of the newspaper strip, with Flash, Dale & Zarkov scooting around to other planets, fighting villains other than Ming and his minions. They're fairly fast reading - obviously aimed at teens - and while they have their moments of Goulart's trademark odd humor, they're also crackin' good space adventure yarns.

I didn't have these books when I was a kid, either*. At ten years-old, I wouldn't have had any idea who Flash Gordon was. If they had seen print just a few years later, around the time of the Filmation cartoon or the Mike Hodges' feature, I'm sure I would have been a lot more interested, especially with those gorgeous cover paintings by veteran paperback and Gold Key Comics artist George Wilson (which explains why it looks a lot like Magnus, Robot Fighter is on cover #2, I guess).

They may not have been on my radar in '74, but their existence does show that even in the years just before the success of Star Wars made Flash (and his comic strip cohort, Buck Rogers) hot cinematic properties again, the iconic interplanetary hero was still a part of the Seventies sci-fi spacescape.

*Instead, I found a copy of #3, The Space Circus, in a used bookstore in Tampa, Florida back around '99, and have been since picking up the other ones online whenever I find affordable copies available. All I need now is #6....
Posted by Christopher Mills at 2:27 AM