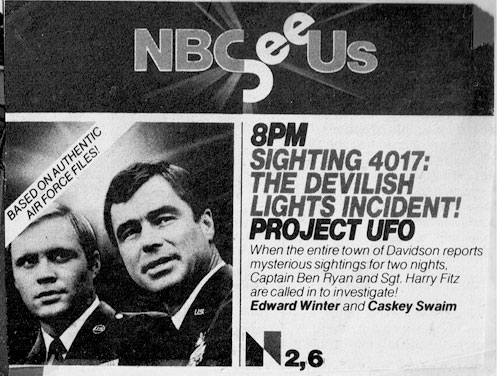 It's not easy finding much memorabilia for the Jack Webb-produced, NBC television series, Project U.F.O. online - so here, scanned from my own scrapbook, is a vintage TV Guide advertisement for the October 28th, 1978 episode.

According to the IMDb, alongside series regulars Edward Winter and Caskey Swaim, this episode guest starred Jared Martin, late of The Fantastic Journey. I wonder who currently owns the rights to this series? It's one of the few genre shows of the decade still not available on home video - and unlike most of them, this one was actually successful enough to last two (albeit 13-episode) seasons!
Posted by Christopher Mills at 1:45 AM