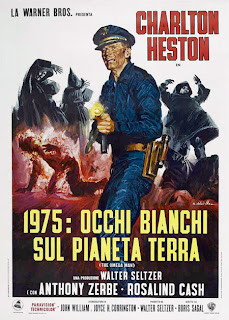 •  Okay - I seriously underestimated how much the holidays would screw with my planned work schedule this month, so the "End of the World As We Knew It" theme "week" will be extended a bit. I still have a few posts in various stages of completion, and will get them published in the next few weeks. This includes an article on The Omega Man....

•  Another thing I'd hoped to do in December was post the first Space: 1970 podcast on Christmas day. Again, though, I misjudged how much work I still needed to do on it (and how little spare time I'd have to do it), so, maybe I'll get it up after New Years (assuming I can figure out how to post it to the site). I actually completed a 20-minute "pilot" a while back, but I want to re-record it and smooth out some rough patches before I present it for public consumption.

•  As noted below, I received the Season 1 Space: 1999 Blu-Ray set from my wife for Christmas. (Praise the cosmos for holiday sales/discounts!)

I'm truly astounded at the visual improvement and the extensive supplemental material. If you're a HD-equipped Space: 1999 fan and on the fence about picking it up (especially if, like me, you've bought the show on DVD a couple times already), I recommend taking the plunge. The audio and video are vastly improved over the Region 1 DVDs. I hope that A&E and Network will work the same magic on UFO sometime soon.

•  As 2010 comes to its end, I'd like to thank everyone who's stopped by Space: 1970, and wish you all a great 2011. Personally, I've had a rough year, but this site has been among its very few joys, and I'm grateful to everyone who visited, and especially those who've commented and/or made a point of following the blog.

If you're on Facebook, please consider "liking" the Space: 1970 Facebook page. If you're interested in supporting the site, there's a Paypal donation button over in the right-hand sidebar (reader donations paid for that Message from Space DVD I reviewed not long ago). Finally, if you're interested in my other work (I write comic books for several publishers as well as short fiction), stop by my homepage at Atomic Pulp and check out my stuff.