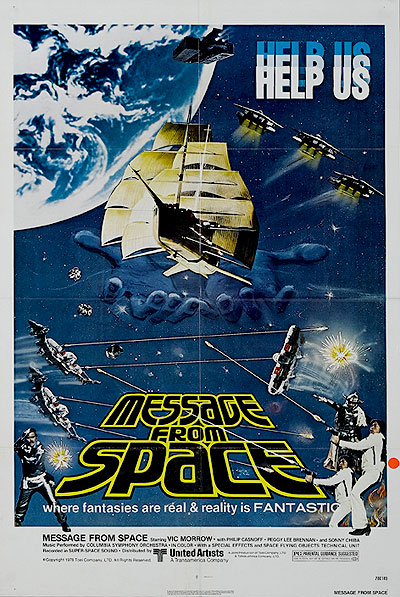 Although it sometimes seems like every cult show or film is available on DVD (Genesis II, Planet Earth, The Shape of Things To Come, Galaxina!?), for the really obsessive 70s sci-fi buff, there are yet a few obscurities that are still unavailable on disc. In fact, most of them have never been released on home video in any format. This includes genre television shows like Project: UFO and Logan's Run, and my two personal holy grails: the Canadian flying saucer epic Starship Invasions, starring Robert Vaughn and Christopher Lee, and Toei Studios' Message From Space, starring Vic Morrow and Sonny Chiba. 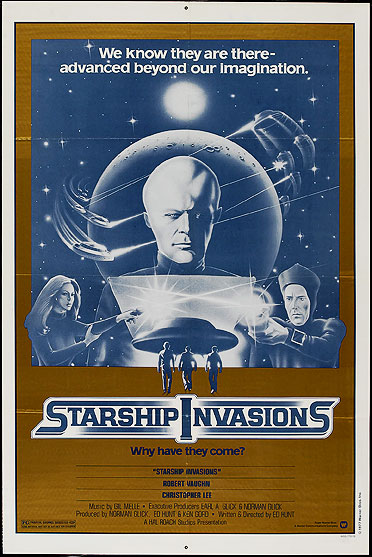 I saw Starship Invasions on network television in the late 70s, and actually went to see Message from Space at the old Waterville, Maine Cinema Center (it's a church now). Starship seems to have all but disappeared from this reality (though YouTube user CyprusCorners has a retitled version uploaded - along with lots of other genre treasures), while Message did run at least a few times on cable's Starz Action movie channel earlier in this decade.

I keep hoping that some adventurous DVD label will release these films on disc in their proper aspect ratios and digitally remastered... but considering just how comparatively obscure these titles are, I'm thinking it's unlikely. Sure, there are bootlegs and "gray market" versions floating around, but aside from being expensive, the quality is usually awful.

Is there some forgotten film from the era that you wish was available on DVD? Let me know in the comments. Who knows who might be reading this blog?
Posted by Christopher Mills at 11:27 PM