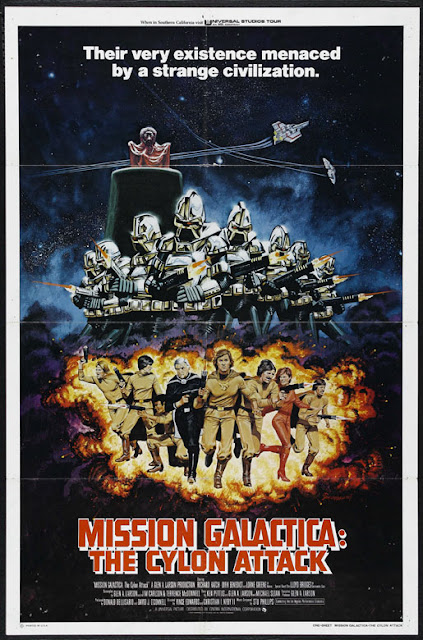 Although not common, neither was it unheard of in the 60s and 70s for television producers to release select episodes of their series to theaters as feature films. The 60s spy show, The Man From U.N.C.L.E., for instance, made a regular practice of it, with each of their two-part episodes being designed specifically to be combined and released internationally as feature films.

In 1978, Battlestar Galactica was the most expensive series ever produced for television. In an attempt to get as much return on their investment as possible, Universal Studios actually released an edited version of the 3-hour premiere episode to theaters during the holiday season, augmented with their patented, rumbling Sensurround process (of course, few theaters were actually set up to employ the process, so despite the ads, most patrons got regular theater sound). This version was subsequently released on home video (and is still the version on DVD).

Universal also produced two additional Galactica features. Mission Galactica: The Cylon Attack was made up primarily of footage from the two-part episiode "The Living Legend" (featuring Lloyd Bridges as The Pegasus' Commander Cain) with additional scenes spliced in from "Fire In Space." It was pretty-well executed, really, except for a poorly written, off-screen bit of dialogue dubbed in at the end to tie up some unresolved plot threads. This feature was released theatrically overseas, as a syndicated television film, and on VHS home video. 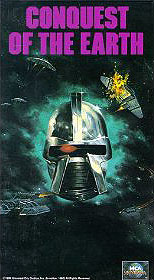 The final Galactica feature was an edited-down version of the 3-part Galactica: 1980 premiere, and was called Conquest of the Earth. This also was released to overseas theaters, independent television stations and home video. Now, as I remember it, the worst part of this particular compilation (beyond it being Galactica: 1980, I mean) is that it completely eliminates the only remotely interesting portions of the original TV episodes: the time-travel adventure with Richard Lynch (probably because it dealt with Nazis) leaving only the really dull running around Los Angeles on the flying Viper motorcycles stuff.

Apparently this strategy was pretty successful for the studio, because in 1979 they actually released the pilot to their new space series, Buck Rogers In The 25th Century, to theaters a couple of months before it debuted on television! More on that later....
Posted by Christopher Mills at 2:23 PM