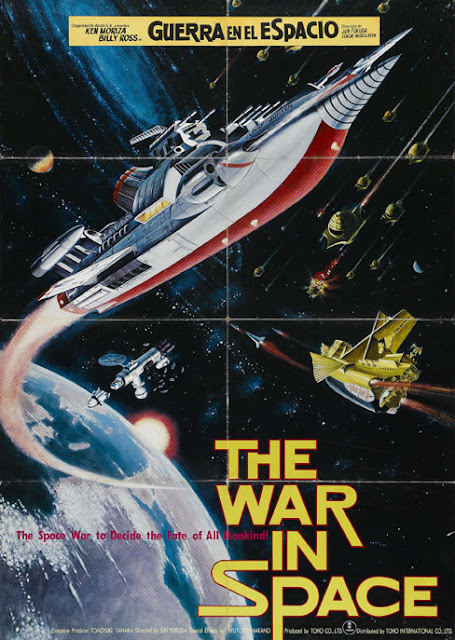 Conceived by Toho Studios as a fast Star Wars cash-in, the final film owes as much to Gerry Anderson’s television shows UFO and Space: 1999 and the Japanese studios’ own Sixties sci-fi thrillers Atragon and Battle in Outer Space as it does to George Lucas’ intergalactic epic.

In the (then-future) year of 1988, UFOs attack the Earth. While the invaders are devastating New York, Paris, Tokyo and the world’s other major cities, a team of scientists race to complete a space battleship called Ghoten. Once launched, the ship and its crew head for Venus, to counterattack the aliens. Along the way, the only female crewmember (lovely Yuko Asano) is kidnapped by the green-skinned, Roman-helmeted alien leader and his horned wookie, UFOs engage in high-speed dogfights with the Earth fighters above the barren Venusian landscape, and space ships explode impressively.

The old school, handcrafted special effects work – finely detailed miniatures on mostly-invisible wires – is expertly executed and effective. The spaceships, in a decidedly Asian conceit, resemble sea-faring vessels, and the alien flagship is specifically modeled on ancient Roman sailing ship designs. The Ghoten features a huge drill bit (shades of Atragon!) and cool, giant revolvers that fire missiles and are also used to launch sleek, one-man fighters. The UFOs are original and unique. Made on a fraction of Star Wars’ budget, The War in Space demonstrates that ingenuity and imagination can carry the day even when money’s tight.

A few years ago, Discotek Media released The War in Space for the first time on U.S. home video (I believe) on DVD with a brilliant 2.35:1 anamorphic widescreen transfer, completely restored and remastered. Audio options included both the original Japanese language track and an English dub, presented in both the original mono and in a newly created 5.1 remix. The Japanese track is preferable, as it’s stronger and more robust. Discotek also included a bevy of cool bonus features, including a fascinating video interview with special effects director Nakano Teruyoshi, the original theatrical trailer, an extensive still gallery, and an informative booklet that includes poster art, spaceship design sketches and liner notes. 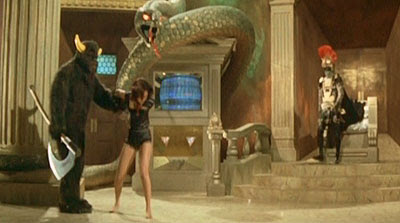 As a fan of 70's outer space epics and Japanese fantasy films, I’ve been wanting to see this movie ever since I saw the poster art in a 1978 issue of Fantastic Films magazine. It took almost 30 years, but I wasn’t disappointed. It’s a terrific presentation of a great old-fashioned space opera, and I recommend it highly.
Posted by Christopher Mills at 12:30 AM