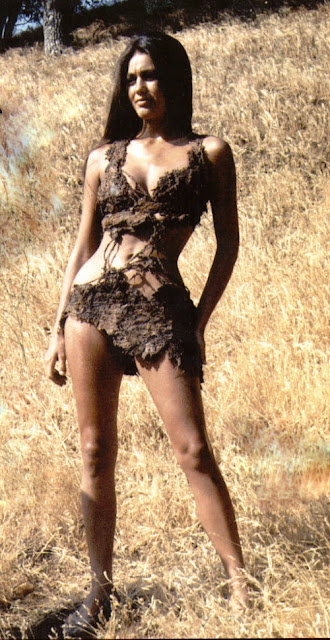 Linda Harrison as the lovely Nova in the first two Planet of the Apes films. Though technically not a "Space Babe," she's definitely one of the few things in the Apes future worth living and fighting for.

I spent all day on Friday watching the five original Apes theatrical features and was once again struck by Miss Harrison's natural beauty and mute charisma. She may have got the part because she was producer Richard Zanuck's girlfriend (and later, wife), but she filled the role of the future's most lovely savage quite capably in both The Planet of the Apes and its immediate sequel, Beneath the Planet of the Apes.
Posted by Christopher Mills at 2:16 AM

Email ThisBlogThis!Share to TwitterShare to FacebookShare to Pinterest
Labels: 1968, 1970, Planet of the Apes, SpaceBabes