Most readers of this blog have probably already seen this, but I thought it was worth posting, and since it's directly tied to the 1978 Battlestar Galactica series, it seems appropriate to this site, as well.

Ten years ago, prior to Universal Studios' revamp/reimagining of Battlestar Galactica for the Sci-Fi Channel, actor Richard Hatch wrote and personally financed this four-minute promotional trailer for a proposed, straight-forward sequel series. 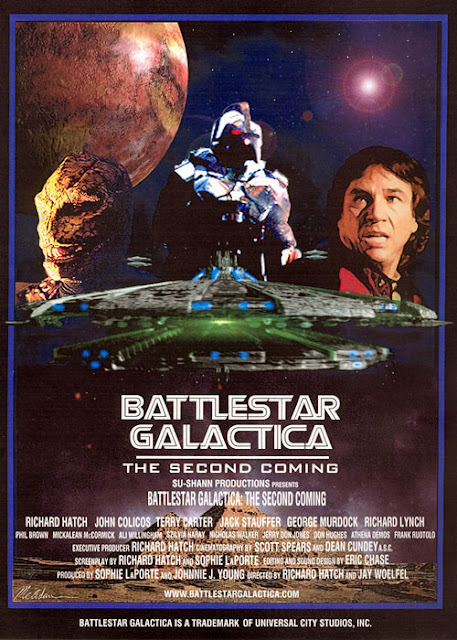 Taking place a couple of decades after the conclusion of the '78 show, Hatch's version had Apollo in charge of the Colonial fleet, having succeeded the now-deceased Adama. Starbuck is missing, and when Baltar returns, warning of a new, more-deadly generation of Cylons, Apollo must train a new force of young warriors to battle the threat.

Hatch ultimately used many of his story concepts in a series of authorized Galactica novels co-written by Christopher Golden (and others). I have three of them, and they're actually pretty good.

Video Copyright 1999 by Su-Shann Productions.
Posted by Christopher Mills at 4:34 AM

Email ThisBlogThis!Share to TwitterShare to FacebookShare to Pinterest
Labels: 1999, Battlestar Galactica, Not the 70s, Video