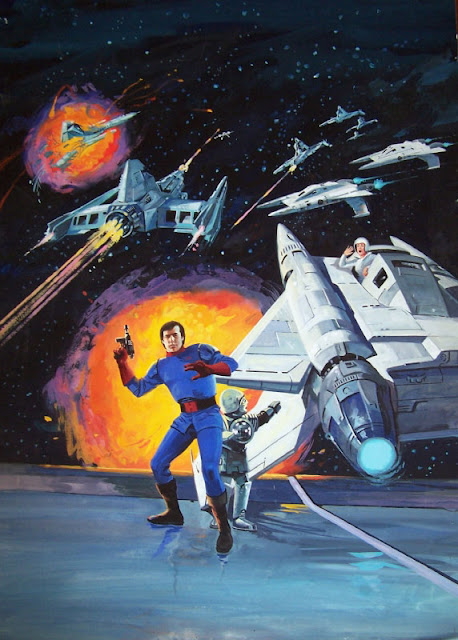 Here's the original art for the cover of Gold Key Comics' Buck Rogers In The 25th Century #4 by artist Frank Bolle. It looks like the artist was given plenty of reference for the spaceships - and Twiki - but not Gil Gerard! Still, it's a beautiful piece of 70s sci-fi art - rayguns, robots and space fighters engaged in cosmic dogfights! How can you not love it?

Bolle is a veteran cartoonist and comics illustrator, with countless credits. He was the first artist on Gold Key's Solar, Man of the Atom, and also drew many adventures of Magnus, Robot Fighter and Flash Gordon. He also illustrated several long-running newspaper comic strips (he's currently the artist on Apartment 3G) and contributed to Boy's Life magazine for many years.

I'm not 100% positive, but I believe he was the artist on the comic adaptation of Robert Heinlein's Between Planets that ran in the Scouting magazine back when I was reading it during the mid-70s, too.
Posted by Christopher Mills at 4:31 AM