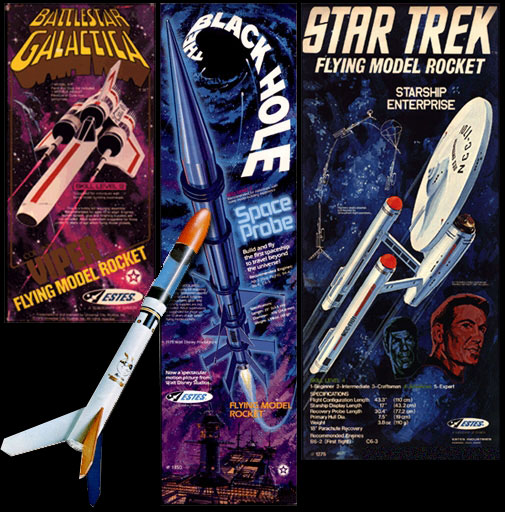 When I was in 7th and 8th grades, I belonged to the Model Rocket Club. Once a week, a handful of students would stay after school, and, under the supervision of our science teacher, Mr. Teague, we'd gather in the parking lot behind Williams Junior High School and fire solid-fuel-powered rockets made of cardboard, plastic and balsa wood into the air. The fun part was pressing the launch button on the little hand-held, battery-powered igniter and watching the rockets take off. The less fun part was hunting in the woods and fields around the school for the rockets after they'd parachuted back to earth. 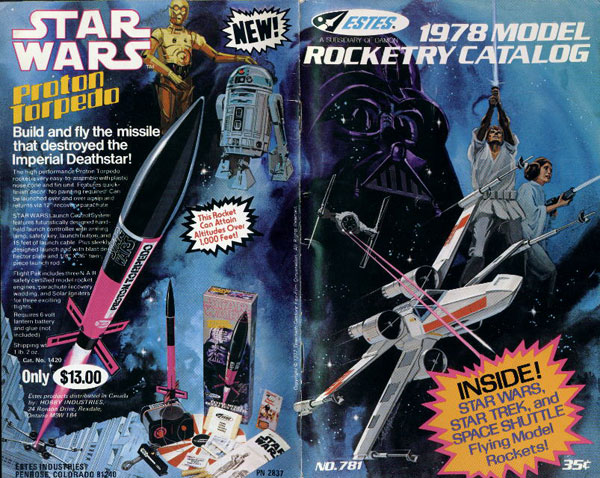 I was pretty into it, as you might imagine, even though my limited modeling skills - and even more limited budget - basically meant that I only built the cheapest and most simple of the rocket kits offered by the Estes company and its prime competitor, Centauri. That didn't stop me from drooling over the plethora of sleek rocket designs offered in their catalogs, though - especially those designs based on the sci-fi movies and TV shows I loved. In fact, those annual, digest-sized catalogs were just as compelling to me as a burgeoning teenager as the Sears Christmas Wishbooks were just a year or two before. I spent hours and hours poring over those colorful pamphlets, fantasizing about owning all those beautiful rocketships.... 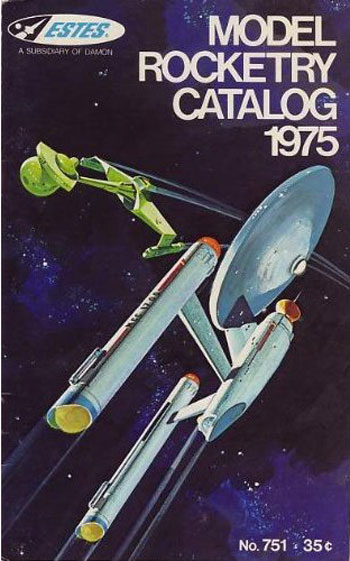 Anyway, Estes offered flying model rocket kits based on the spaceships of Star Trek, Star Wars, Battlestar Galactica... and even offered a Black Hole "space probe" rocket, while Centauri sold a Space: 1999 Eagle. These things were genuine marvels of engineering; the X-Wing and Viper were fairly easy to to adapt, since they were reasonably aerodynamic designs already. But the U.S.S. Enterprise and Klingon Cruiser really required some creative thinking on the part of Estes' designers. In the case of the TIE Fighter and the Space: 1999 Eagle, they ended up with basically lightweight, hollow, vacuformed plastic models that sat atop standard cardboard tube rocket fuselages. 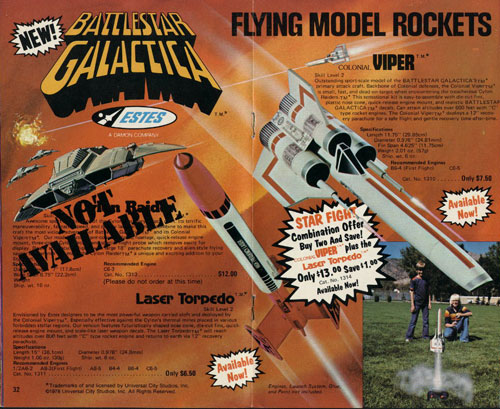 I desperately coveted the X-Wing and Viper - I knew the others were beyond my skills - but the only one of the sci-fi tie-ins I owned was the Centauri Eagle... and I never even got it painted up. Eager to see it fly, I took the assembled but unpainted model to one of our meetings and took my turn at the launch pad. When I pushed the button, the Eagle shot into the sky -- and came right back down when the parachute failed to deploy. It crashed into the parking lot and the plastic shell shattered. I wasn't happy.

I know the hobby still exists, but I doubt that it's as popular as it was back in the late Sixties and Seventies.
Posted by Christopher Mills at 3:08 PM