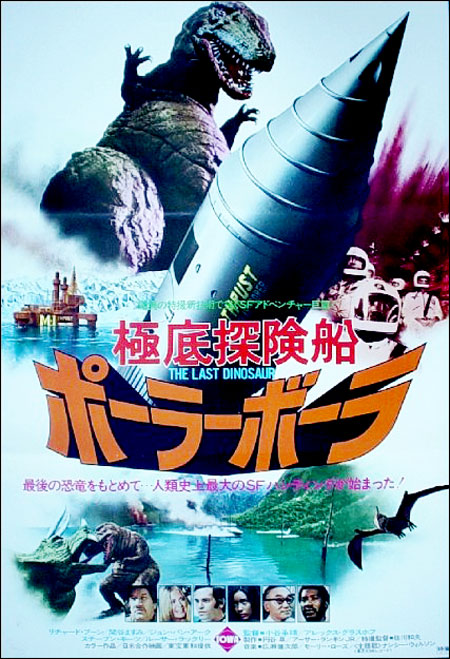 One of my fondest sci-fi TV memories from my childhood was an ABC television movie-of-the-week called The Last Dinosaur (1977). Now, thanks to the crew at Warner Archives, I've been able to revisit that experience on DVD. 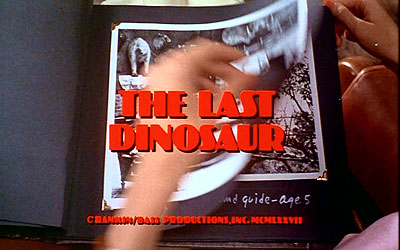 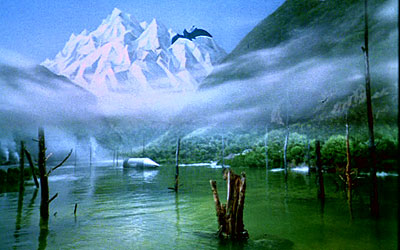 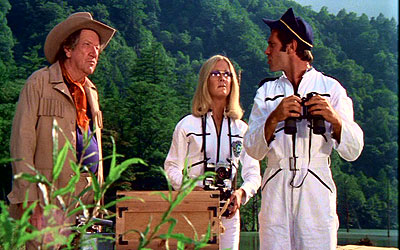 An Antarctic oil survey financed by billionaire industrialist and big game hunter Masten Thrust (Richard Boone,) discovers a pocket of prehistoric flora and fauna in the crater of a dormant volcano, surrounded by mountains of ice and inaccessible by land. Using a drill-equipped vehicle called the "Polar Borer," Thrust personally leads a scientific expedition through the crust of the Earth itself into the time-lost land, accompanied by a plucky girl reporter (TV veteran Joan Van Ark), a Japanese scientist (Tetsu Nakamura), a geologist (Steven Keats, Hanger 18) and his African "hunting guide," Bunta (Luther Rackley). After a disastrous encounter with a vicious Tyrannosaurus Rex, the group finds themselves stranded in the prehistoric jungle and must find a way to survive its myriad perils, including a tribe of savage proto-humans and the ever-present threat of the hungry T-Rex. 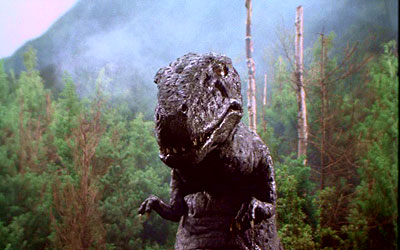 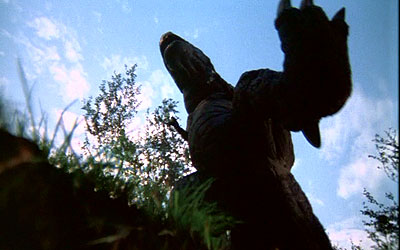 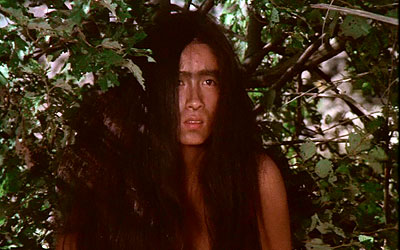 The Last Dinosaur made its U.S. premiere on prime time network television, but this co-production between Rankin-Bass Productions (best known for their stop-motion holiday specials) and Japan's Tsuburaya Productions (creators of Ultraman), was released theatrically pretty much everywhere else in the world, and this new DVD from Warner Archives makes that extended theatrical version available in the U.S. for the first time. 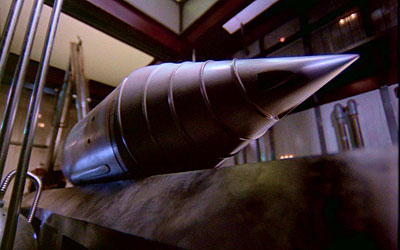 Written by comic book veteran William Overgard, The Last Dinosaur is an entertaining lost world adventure with compelling characters, plenty of prehistoric thrills, and lots of dino-action. It's not particularly original, with elements borrowed from genre favorites like At The Earth's Core and The Land Unknown, but it hits all the right adventure beats, and even manages some decently-sketched characterizations and effective moments of drama. 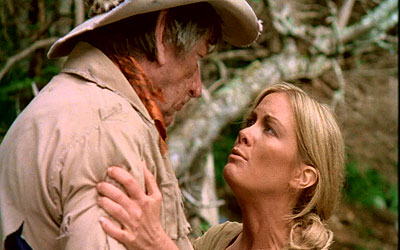 Despite an awful toupee and ill-fitting dentures (I swear he adjusts them on screen more than once) Richard Boone is great as the egomaniacal Thrust, who, it seems, is the true "Last Dinosaur" of the title; an archetypical Alpha-male, unapologetic chauvinist and hunter, who despite his material wealth and success, seems out of step with modern society. As the token female, Joan Van Ark is attractive, tough and appealing. 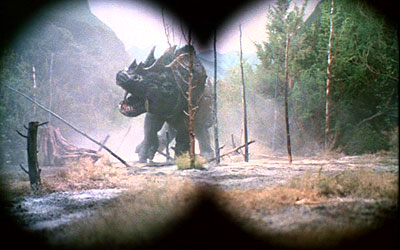 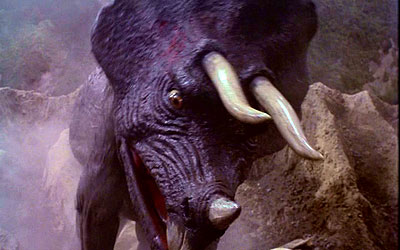 The special effects are delightfully Old School, with wonderful man-in-suit dinosaurs, gorgeous matte paintings, and miniature sets/vehicles. They're not realistic or even remotely convincing, but they are damned charming and entertaining. My personal favorite effects sequence is the battle between the T-Rex and a Triceratops in a "dinosaur graveyard" surrounded by dino skeletons! I would be remiss if I neglected to mention the wonderfully corny theme song, a decidedly 70s-styled ballad by composer Maury Laws, sung by Nancy Wilson. 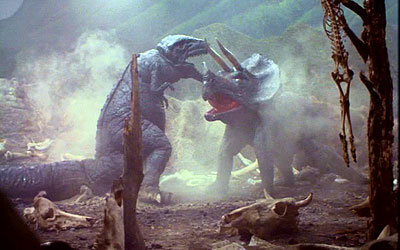 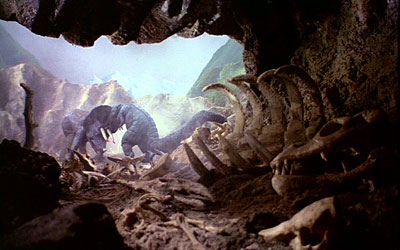 The Manufacture-On-Demand DVD from Warner Archive sports a very decent, 1.78:1 anamorphic widescreen transfer and Dolby 2.0 Mono audio. The source print used - the extended International theatrical cut - is in reasonably good shape, with only minimal evidence of age-related wear. Picture quality is surprisingly good, except during some of the special effects process shots, but that's inherent in the old-school techniques used in the film and not any sort of deficiency in the transfer. There are no extras included.

The Last Dinosaur is a product of its time, and unlikely to impress those who demand the slick CGI and lightning pace of modern fantasy films. But, if you're looking for an old fashioned adventure tale, it's a terrific flick, along the lines of The Land That Time Forgot & The People That Time Forgot, and a lot of fun. Recommended.

You can buy it direct from Warner Archive or through Amazon:  The Last Dinosaur
Posted by Christopher Mills at 5:02 PM