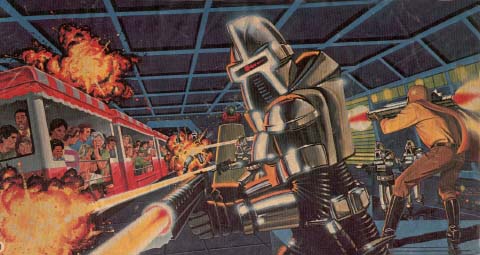 In 1980, Universal Studios added a Battlestar Galactica attraction, "Battle Of Galactica," to their famous Hollywood studio tour. This lasted through 1992(!), and featured an elaborate (for the time) laser light show combined with animatronic Cylons, several Ovions (from the Galactica pilot) and the Imperious Leader, along with an actor costumed as a Colonial Warrior. Patrick Macnee recorded an original audio track for the attraction, and Gary Owens provided the Cylon voices (as he would again in Galactica: 1980's "The Return of Starbuck.").


As you can see from the video above, the scenario was thus: your tour tram would be forced by Cylon "tanks" into a landing craft, where you would be threatened by the Imperious Leader. Suddenly, an unnamed Warrior would arrive, and engage the Cylons in battle while your tram driver got you out of there. Corny? Sure. But I would have loved to experienced it personally. 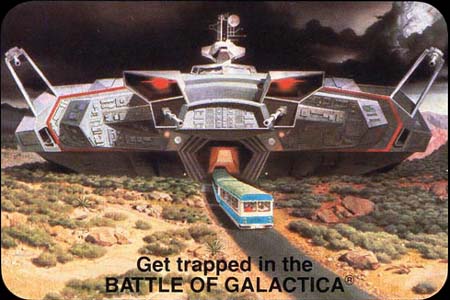 The "Battle of Galactica" attraction actually showed up on-screen in an early episode of The A-Team (leading to that great clip of Dirk Benedict's character smirking at a Cylon) and in the 1980 Get Smart feature film, The Nude Bomb. That flick had an entire action sequence (i.e. commercial) set on the Universal lot, including having Don Adams' Maxwell Smart engage in a shoot-out with a bad guy inside the Galactica attraction.
Posted by Christopher Mills at 12:17 AM