SPLINTER OF THE MIND'S EYE (1978) Cover Art by Ralph McQuarrie 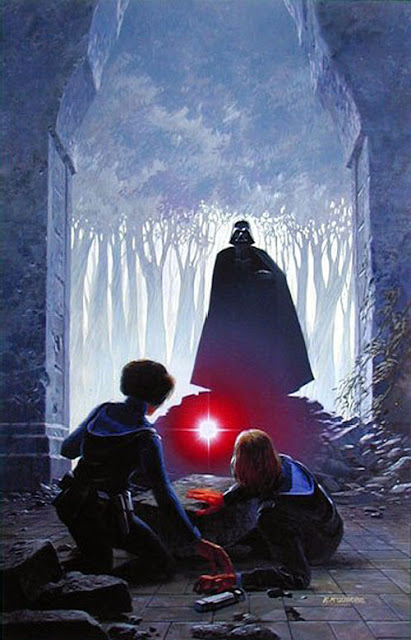 It would be difficult for anyone who wasn't there to understand what a huge friggin' deal it was when Ballantine / Del Rey Books published the very first Star Wars original novel in 1978. Splinter Of The Mind's Eye, by Space: 1970's favorite author, Alan Dean Foster, was not just a movie tie-in paperback, but a genuine event.

Aside from the monthly Marvel Comics series (which had only just started moving beyond its movie adaptation), it was the first new adventure in the Star Wars universe - ever - and for all of us who had thrilled at The Adventures of Luke Skywalker in the theaters the Summer before, Foster's entertaining novel was our first opportunity to return to George Lucas' fantastic film universe. Okay, so Han Solo and Chewie weren't in it - and many of its details were contradicted by The Empire Strikes Back a couple years later, but damn, it was a fun book, filled with breathless action, and very well-written by Foster, who had penned the original movie novelization for Lucas. Reportedly Lucas asked Foster to write Splinter as a potential film sequel, just in case Star Wars did well enough at the box office to merit one. But he was also asked to write it so it could be filmed more cheaply than the first, hence its entirely planet-bound plot.

Its cover - by Star Wars conceptual genius, Ralph McQuarrie - was iconic. The looming Vader, the crumbling jungle temple backdrop, the crimson flare of the Kaiburr Crystal, Luke & Leia trapped and helpless before the Sith Lord... great stuff. Simple and dramatic.

Now, of course, there have been five more films, an animated cartoon series, countless comic books, novels, radio plays, video games, etc. - but back in '78, this was all there was.

And, as the saying goes: we loved it!
Posted by Christopher Mills at 1:49 AM