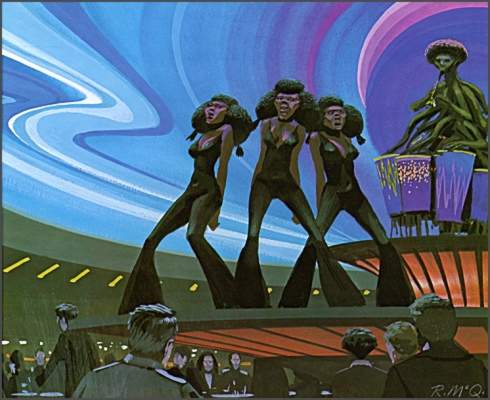 • Well, here we are, well into January, and I still haven't written up my review of The Omega Man - it is high on my to-do list, however, along with reviews of Star Maidens and The Humanoid. I also have an essay/article in the works about the aborted Star Trek 2 television series (they call it "Phase 2" these days, but at the time it was simply Star Trek 2), and a new "Favorite Episode" post. All of these have been delayed by my other writing commitments over the last month, as I'm getting back to regular comics writing and DVD reviewing again, which also explains the preponderance of image-based posts of late. Sadly, time management is not among my strengths...

• I'm currently re-reading the second Berkley Battlestar Galactica novel from 1978, The Cylon Death Machine, adapted by Robert Thurston (and "Glen A. Larson") from the two-part episode, "Gun On Ice Planet Zero." I read this one numerous times when I was a teen, and am pleased to find that I still enjoy it a great deal. Thurston really had a handle on the characters and Galactica universe (even if there were some variances from the aired episodes), and I especially like his handling of the Cylons and the character of Croft (played by Roy Thinnes on the show). It's a terrific space adventure novel, and confirms my opinion that Thurston was the best of the Berkley Galactica scribes.

•  Blatant Cross-Promotion: First, I want to remind you all that my new weekly webcomic, Perils On Planet X, drawn by the talented Gene Gonazles, begins a week from Friday, on February 1st, at perilsonplanetx.com.  This serialized interplanetary swashbuckler will have a new page posted each Friday, and chronicles the adventures of modern-day Earth astronaut Donovan Hawke, stranded on the lost planet of Xylos, hundreds of millions of years in the past. The story is packed with monsters, beautiful women and lots of Flash Gordon-styled thrills. I hope you'll check it out, bookmark it, and follow the comic each Friday in 2013.

Anyone who enjoys my writing and the DVD reviews on this blog should check out my DVD Late Show site, where I have been reviewing B-movies, cult films and genre television shows on DVD and Blu-ray disc since 2005. Among the over 700 reviews on the site are plenty of Space: 1970-era favorites, like Battle Beyond The Stars, Damnation Alley, Starcrash, The Starlost, the Space: 1999 Blu-rays, and many more.
Posted by Christopher Mills at 3:02 PM