Books In The Basement 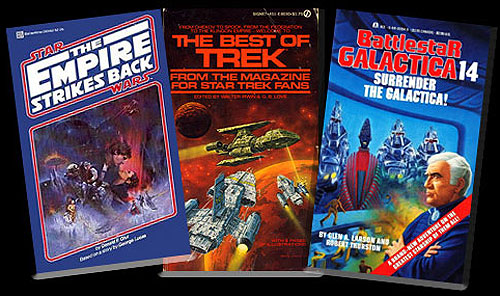 So... the other night I was poking around in my parents' basement and found a box of books that I thought were long lost and/or I'd forgotten I had. In the first category, was my near-mint first printing of Donald Glut's Empire Strikes Back novelization from the Spring of 1980 and nearly a dozen volumes of The Best Of Trek - a series of paperbacks published by Signet Books that collected fan-written Star Trek articles from G.B. Love's seminal fanzine, Trek. In the "forgotten I ever had" category was the fourteenth and final Battlestar Galactica paperback from Berkley Books, Surrender The Galactica!

That latter discovery was especially fortuitous, because, as I've noted elsewhere on this blog, I've been slowly filling in my collection of Berkley Galactica titles, buying them piecemeal from various online dealers, and Surrender has proven to be the priciest of the books in good (or better) condition. So, what a pleasant surprise to discover I already owned a copy - and in like-new condition!

As a Star Kid, I didn't collect a lot of toys/action figures - I had model kits - but, being a voracious reader, I did collect a lot of books and magazines. All these years later, it's still the books that really spark my nostalgia and the only Space: 1970 "collectibles" that I still hunt down and buy.
Posted by Christopher Mills at 2:33 PM