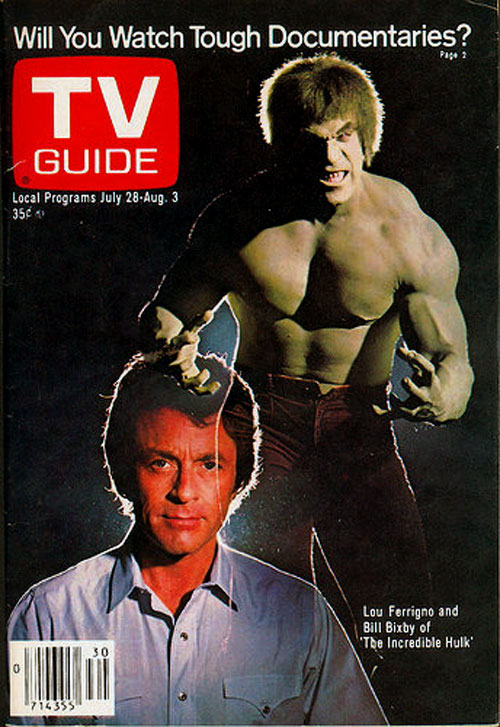 I might as well go on record here: The Incredible Hulk is my favorite of the comic-based television series/specials of the 1970s. Oh, I loved Wonder Woman, Isis, and Shazam!, and even the Spider-Man and Captain America shows, but The Incredible Hulk was (in my opinion) the best of them all.

As developed by Kenneth Johnson (one of the more genre-savvy producers of the era), Hulk was a science fiction show first, with storylines designed to appeal to both adolescent and adult audiences. The format was borrowed from The Fugitive (and a few dozen other shows), but the characterization and pseudo-science of Banner's transformation gave the show a distinct identity, and it ended up running longer than any of the other "superhero" shows, garnering strong ratings for much of its run.

Veteran television actor Bill Bixby was a compelling, sympathetic lead, bringing remarkable humanity to his role and always taking it seriously... without ever being grim. Lou Ferrigno's Hulk was a monster in the vein of the Universal Monster films of the 30s and 40s, a misunderstood and persecuted brute that, even through the rage, retained a spark of humanity and compassion.

Comic book purists may bitch and complain about the Hulk's scaled down strength, or the changing of Banner's first name, but frankly, that's all irrelevant bullshit. Comic book fans - moreso than most - should understand and forgive different interpretations of their favorite characters, and if they can't, they should rationalize and accept that the TV Hulk simply existed in a parallel universe from his four color cousin.

The changes wrought on The Incredible Hulk to make it sustainable as a prime time 70s television series were all sound and well-considered, and I believe resulted in a genuinely "classic" TV series.
Posted by Christopher Mills at 4:19 PM