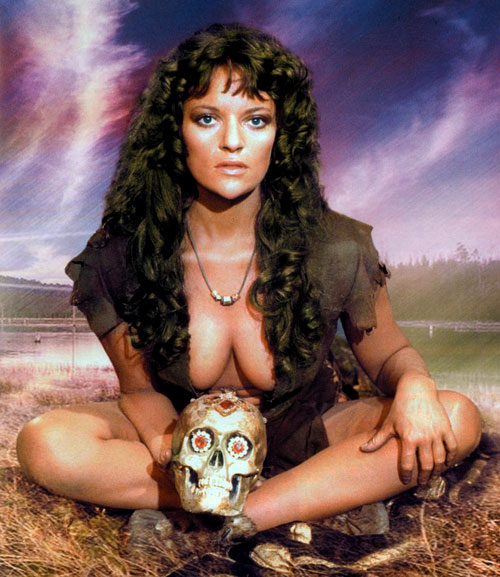 Our first Space Babe of 2013 is lost world lovely Dana Gillespie, from 1977's The People That Time Forgot. Quite fetching in her plunging doeskin, the British-born cavegirl was an appealing ally and guide to adventurer Patrck Wayne as he searched the dinosaur-infested time-lost land for the wayward Doug McClure.

Born in March of 1949, Gillispie is a popular singer of pop and "risque" blues tunes, and was the original Mary Magdalene in the first London production of Andrew Lloyd Webber's Jesus Christ Superstar in 1971. Aside from The People That Time Forgot, the shapely young actress' genre credits include a memorable role in Hammer Films' bizarre adventure film, The Lost Continent in 1968.

These days, the multiple-award-winning Gillispie still performs regularly in England and Europe with her London Blues Band. Her personal website can be found HERE.
Posted by Christopher Mills at 8:35 AM