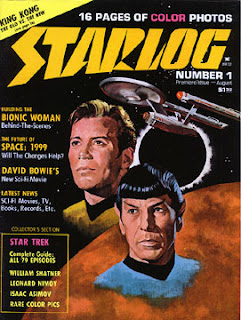 If I had been born five or ten years earlier, I most certainly would have been a "Monster Kid," haunting the local newstand for the latest issue of Famous Monsters Of Filmland, scouring the TV Guide listings for Creature Features or Shock Theater showings, and clumsily building Aurora model kits of Dracula, Frankenstein, The Mummy and Quasimodo.

As it turned out, I didn't become a "Monster Kid" until I was nearly 30.

I was born in 1965. By the time I was five or six years old, the monster fad of the 60s had mostly faded away. The Groovie Goolies were still rockin' on Saturday morning, but I was more interested in the Star Trek cartoon (from the same studio), and, when I could find them, reruns of the live-action Trek.

By the time I was ten, I had already collected numerous Star Trek books - James Blish and Alan Dean Foster's short story adaptations, The Making of, The Concordance, The New Voyages, The Technical Manual. Then, one of our local stations starting airing Space: 1999. I loved it, and poured over the television listings for more sci-fi. The Planet of the Apes movies, TV series and cartoons, Logan's Run. Then, a year or so later -- Star Wars.

Christmas '78 I received three record albums - my first ever - the Star Wars, Close Encounters of the Third Kind and Battlestar Galactica soundtrack LPs. I started spending my allowance on Starlog and Fantastic Films magazines. I had model kits of all the Star Wars, Galactica and Buck Rogers space ships. I bought the movie novelizations and would use my old cassette recorder to make audio recordings of my favorite sci-fi TV shows.


From the newspaper, I clipped out movie advertisements for Message From Space, The Black Hole and Alien -- and pasted them in a photo album along with TV Guide ads for Galactica (painted by Frank Frazetta!), Quark, and Buck Rogers... and telefilms like The Martian Chronicles and Brave New World.

I was a nut for anything sci-fi, and back then, it wasn't cool. I took massive amounts of abuse from my peers. If I was caught with a Star Trek paperback in school by a my classmates, it was all but guaranteed that it would be shredded by lunch. I was called all sorts of things -- most of them pretty awful.

But I had my magazines and audio cassettes and paperback novelizations and my model kits and comic books... and somehow I survived.

This blog is devoted to those science fiction films and shows that were such a large part of my childhood. I loved those programs, and still do today. In fact, I enjoy them as much now as I ever did, and prefer them over most modern genre product. (Guess which Battlestar I think is the better one?) I still admire the handcrafted model spaceships and stop-motion animated monsters (you won't ever find the word "cheesy"used to describe those effects here!), the gallant space heroes and sizzling space babes, the comic relief robots (Twiki! Peepo!) and the sense of wonder those shows stirred in me.

I don't expect that I'll be posting to this blog often. In fact, many of the initial posts will probably be revised versions of pieces that I've written before that appeared elsewhere. But when I do feel like writing about one of those childhood favorite space operas, I'll be doing it here instead of at one of my other sites.

Journey with me back to when the future was...fun!
Posted by Christopher Mills at 5:58 AM