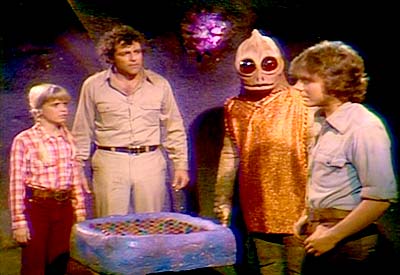 •  Well, despite a Blogger hiccup that made about a hundred votes disappear overnight a few days ago, the second Space: 1970 Poll seems to have been a popular success. The question was: "Which 70s Saturday Morning Live-Action Sci-Fi Kid's Show Was Your Favorite?" Although it wasn't spelled out, the poll was meant only to cover series that originally aired on Saturday mornings on American television networks (ABC, NBC & CBS) during the 1970s.

There were 143 votes in total, and the Sid & Marty Krofft production Land of the Lost received 61 of them. I voted for Lost myself - of all the series on the ballot, Land of the Lost had the most well-realized sci-fi setting and strongest writing (especially during the first season). Plus, you know, dinosaurs. If not for Land of the Lost, I might have voted for Jason of Star Command. It was ridiculous, but it was action packed, and full of fantastic special effects.

Filmation Studios' Ark II came in second, with 19 votes, and the same studio's Shazam! and Jason of Star Command tied for third place. The only show on the ballot to receive no votes whatsoever was the caveman adventure Korg: 70000 B.C. (produced by notorious Star Trek & Space :1999 producer Fred Frieberger). I included comedies like Sid & Marty Krofft's The Lost Saucer and Far Out Space Nuts, because, silly as they were, both shows had some pretty neat alien costumes and sometimes, cool miniature space ships/planetscapes.

One more note about the Polls - if you read this blog through its RSS feed, you should know that the Poll is only available here on the actual site.

•  Look for full-length posts on Planet Earth and Strange New World later this month, as I've now watched both discs from Warner Archive. Strange New World was the only one of the Warner Bros "PAX Trilogy" I hadn't seen since its original airing, and I was surprised how much of it I remembered. I'll also be reviewing the Tron Blu-Ray disc sometime in the next few days at my DVD Late Show site, so stay tuned. Look too for the long-promised Omega Man post, another "Favorite Episodes" article. No, really. They're on the way. I mean it....

•   Still looking for a good publicity photos of Jean Marie Hon from Ark II and/or Man From Atlantis, The Fantastic Journey's Katie Saylor, and Space Academy's Maggie Cooper for future Space Babes post. I'm also looking for a videotape or DVD of The Questor Tapes. Finally, if you enjoy this blog and you'd like to help support this site financially, please consider buying your vintage genre DVDs through the Amazon links on this page, or maybe making a donation via the Paypal link in the sidebar. I'm trying to save up for a new scanner so I can pillage my vast magazine and memorabilia collections for the blog.

Thanks to everyone who stops by, and especially to those who link to Space: 1970 and spread the word on Twitter and Facebook. Your support is greatly appreciated!
Posted by Christopher Mills at 11:58 PM