News: DAMNATION ALLEY (1977) To Get Blu-Ray Release in July 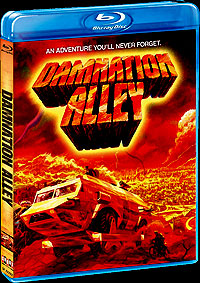 Gotta thank Brandon Gantt again for passing along this news over on the Space: 1970 Facebook Page: Cliff MacMillian of Shout! Factory has confirmed that the post-Apocalyptic "road" movie, Damnation Alley, starring Jan-Michael Vincent and George Peppard (also known as the film that 20th Century Fox thought would be their big sci-fi blockbuster for the Summer of 1977!), will not only be getting a standard DVD release this Summer, but a high-definition Blu-Ray edition, as well.

Apparently, both editions will be released on July 12, the same day as Shout!'s Battle Beyond The Stars discs. Of course, this information is tentative, and subject to change.

Regardless of these films' relative merits, both titles have been long-anticipated by yours truly, and I'm particularly pleased to hear that Shout! Factory hasn't given up on the Blu-Ray format for their exploitation film releases. I've heard that sales haven't always met their expectations, and it looked, for a while there, that we wouldn't be seeing anymore HD editions of cult titles from the company. This makes the news of Damnation Alley's Blu-Ray edition doubly surprising, and all the more welcome.
Posted by Christopher Mills at 12:10 AM