YOR, THE HUNTER FROM THE FUTURE (1983) Theatrical Posters 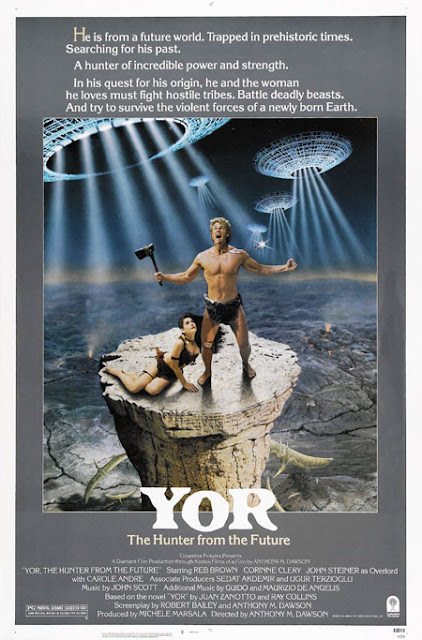 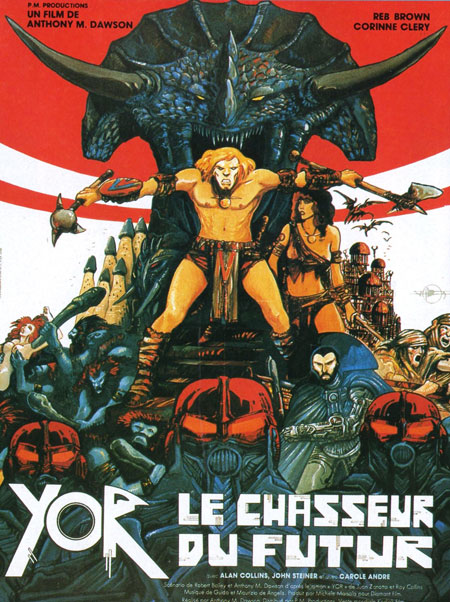 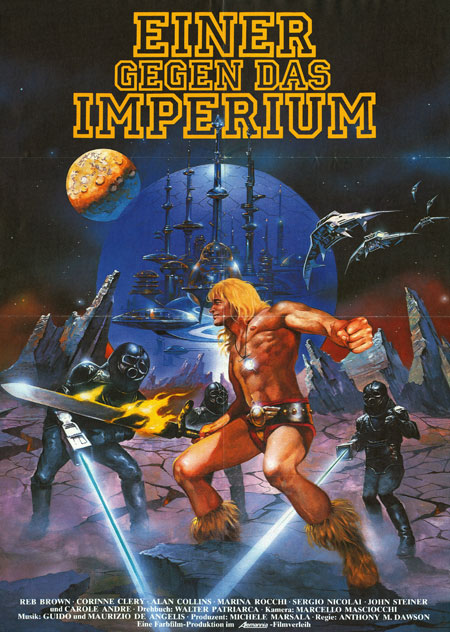 Yor, The Hunter From the Future began life as a television miniseries in Italy directed by Antonio Margheretti (often credited as "Anthony Dawson"), that chronicled the adventures of a buff blond caveman named - of course - Yor (American actor Reb Brown) as he struggled to survive a savage world full of dinosaurs and other monstrous creatures - and strange, laser-wielding warriors from a mysterious, technologically-advanced island society. This 4-hour epic was then cut down to feature length and released internationally as a movie - Columbia Pictures unleashed in in the U.S. in the summer of 1983.

I actually went to see this in the theater in '83, lured in by Columbia's ad campaign, which promised everything that a teenage geek guy could possibly want to see in a movie: cavewomen, dinosaurs and laser guns & flying saucers! Unfortunately, what I got was a low-budget, badly-dubbed, disjointed disappointment. I saw it again just a few years ago on cable, and was then able to appreciate it a bit more for its camp value - but, then, I'm more open-minded about movies now than I was at age 17-18.

Margheretti was no stranger to sci-fi. Back in the Sixties, he had directed a number of popular space operas - Space Men, Wild Wild Planet, War Between the Planets, et al - but, like pretty much all of his many exploitation movies, Yor is a somewhat slapdash, sloppy - but energetic - mess. It's entertaining, but you feel guilty enjoying it.

I don't feel guilty about enjoying these posters, though; the U.S. one-sheet at the top is kinda bland - and previews the sort of static, Photoshop crap we see these days - but I really like the "underground comix" look of the second, and that third one resembles the covers of many of the fantasy paperbacks on my shelves. Interestingly, the artist of this piece has actually swiped Frank Frazetta's interpretation of the Battlestar Galactica Cylon Raiders (as seen in THIS painting) for the spaceships!

Considering how prevalent this flick was on 80s cable television, I'm surprised some cult video label hasn't released it on U.S. DVD. It can be watched/bought via Amazon Instant... but that's not really the same.
Posted by Christopher Mills at 5:12 AM