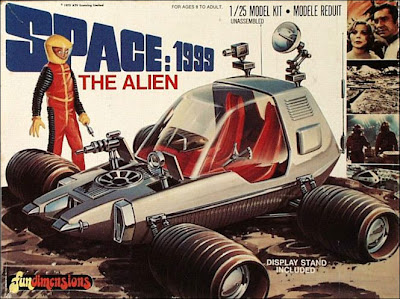 Don't you love it when toy licensees just make shit up? Obviously FunDimensions really wanted a model kit in their Space: 1999 line that they could sell to the car model enthusiasts - and those little yellow moonbuggies just weren't sexy enough.

Apparently, this car is actually a modified (with extra sci-fi gadgets & "alien" figure) reissue of a George Barris 1970 design car called the "Moonscope" (reissued by AMT again in 2002).
Posted by Christopher Mills at 3:33 PM

Email ThisBlogThis!Share to TwitterShare to FacebookShare to Pinterest
Labels: 1975, Memorabilia, My Models, Space: 1999