You Never Forget Your First... PLANET OF THE APES 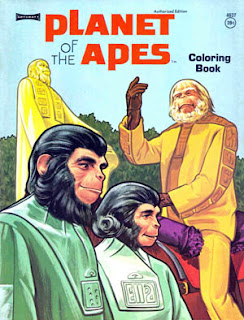 As regular readers of this blog may recall from a few posts back, I recently acquired an HD television set and all of the Planet of the Apes feature films on Blu-Ray disc. Re-watching the original movie in high-def reminded me of the first time I saw it; not in the theater (I was only about three years old when Planet of the Apes had its theatrical run), but on television... around 1973 (I think).
Obviously, I was already familiar with the franchise, but I'd never actually seen an Apes movie. I'm pretty sure this was before the television series, so I'm thinking it was December of 1973. I haven't been able to track down any network TV schedules going that far back to confirm the dates, but I know it was in December, because my parents were going to a Christmas party. For some reason, they had been unable to secure the services of a babysitter for the evening, so I was informed that I was going to accompany them. It was a "grown-up" party (cocktails), so I was to spend the duration in an upstairs bedroom at their host's home, sleeping, until they were ready to go home.

I balked. For at least a week (since the latest TV Guide had arrived - even at eight years-old, I made a weekly habit of scouring each issue with a fine-tooth comb for cool stuff to watch) I had been plotting to watch The Planet of the Apes on TV - but it was airing the same night as their stupid party.

After much bargaining, my mom finally called her friends to see if they had a TV in that room. They did, so it was agreed that I could stay up and watch the movie while my parents enjoyed their party downstairs. I'm sure I had to make some sort of concessions and/or promises of my own, though I no longer recall what they might have been. To seal the deal, my mom bought me a Planet of the Apes coloring book ( the one pictured with this post).
That coloring book was the first piece of Apes memorabilia I owned - and I recently discovered, while prowling through my parents' basement,  that I still own it. Once the TV series - and then the animated Return To The Planet of the Apes - debuted, I remember picking up other bits and pieces of Apes merchandise: trading cards from the TV show, a Mego gorilla and Cornelius (or was it Galen?), the Power Records comic book adaptation of Escape from The Planet of the Apes, one of those little Galen figures with a parachute, etc. 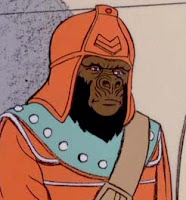 You know, I just had another memory: if I recall correctly, the night before the cartoon show premiered, I slept over at my friend Mark Usher's house. He had a bunch of Mego POTA figures, and after we watched the first episode of the cartoon series, I'm pretty sure we spent the rest of the afternoon in his backyard working out our own continuation of the story with his Megos. Did I mention that Mark had that awesome POTA Ape Fortress playset?
It was great being a kid back then, before the Internet, movies-on-demand, and videogames, when you had to actually put some planning and effort into watching a movie like Planet of the Apes on television, or arrange your activities around the TV schedule. When cartoons were pretty much only on TV on Saturday mornings (no 24-hour cartoon channels, back then!), and playtime involved using your imagination instead of sitting in front of a monitor with a controller in your hand....

Don't get me wrong - I love my vast video collection, Netflix Instant and video game consoles, but then, I got all that stuff as an adult. If I'd had those things as a kid, would I still have memories like these? Would I even remember the first time I saw Planet of the Apes (or Star Wars, or Star Trek- TMP)? I kinda doubt it....
Posted by Christopher Mills at 12:05 AM

Email ThisBlogThis!Share to TwitterShare to FacebookShare to Pinterest
Labels: Memorabilia, Memories, Planet of the Apes