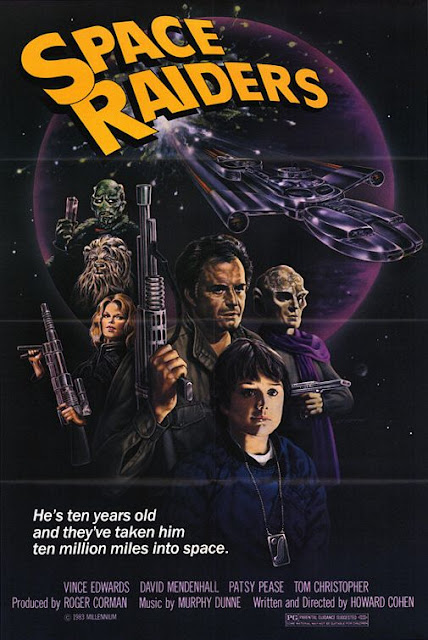 I wonder if Shout! Factory has any plans to bring the 1983 Space Raiders out on DVD as part of the "Roger Corman Cult Classics" line? This sci-fi variation on Treasure Island recycles all of its special effects footage (and most of James Horner's music) from Corman's Battle Beyond the Stars and Android, but I remember it being kinda fun. Not good, of course, but kinda fun - in that low-budget, Sunday afternoon and I'm single and bored VHS rental sorta way. 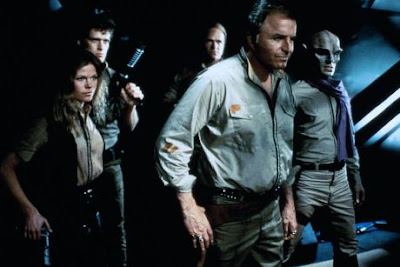 As I recall - and mind you, I haven't seen the film since the mid-80s - the plot, such as it might be, revolves around an annoying little kid who falls in with a bunch of space pirates, led by the imaginatively named Captain Hawk, played by Vince Edwards (best known as Dr. Ben Casey on the 60s' TV series of the same name). Interestingly (at least to a trivia-minded Star Kid like me) one of his crew is an alien played by Thom Christopher, who played an alien named Hawk on Buck Rogers in the 25th Century a couple years earlier. 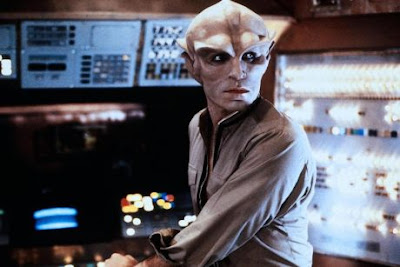 The crew of Hawk's ship (Nell, from Battle Beyond the Stars, with a new and vastly less-imaginatively designed interior) are the usual motley assortment of basically good-hearted rogues, whose criminal activities are forced upon them by the inherent inequities of the galactic economy, which is dominated by an evil corporation known only as The Company. (Looking at these stills, they sorta remind me of the cast of Firefly, actually... hmmmm...)  I remember that for what was ostensibly a "kid's film," a lot of characters died... and it was almost always because of some stupid thing the kid did.

Anyway, I'm sure it's a pretty bad movie, but it would make a good candidate for the Shout! line. Hell, I'd buy it. It was released through Corman's short-lived "Millennium" company, though, and I don't know if any of those titles are included in the film package that Shout! has the rights to.
Posted by Christopher Mills at 3:33 AM