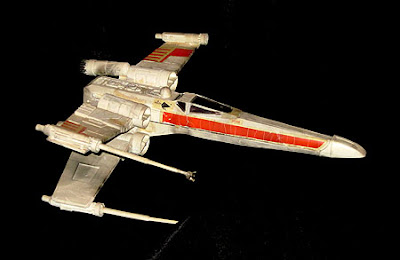 Here are the last of my 1970s vintage, built-up spaceship models. Clearly, my Star Wars models haven't held up as well as my Galactica and Buck Rogers ones - but, to be fair, they're the oldest ones I still have left. And unlike my Star Trek, Space: 1999, Message From Space and Moonraker models, at least they still exist.

The MPC X-Wing Fighter above is in bad shape, missing an engine and a couple of wing lasers. The "battle damage" attempts didn't work quite as well as on the Viper, probably because the X-Wing was molded in white instead of gray. You will also note that the only attempt I made to paint anything on this model was the cockpit windows. Not the R2 unit, though - it was too damned small. 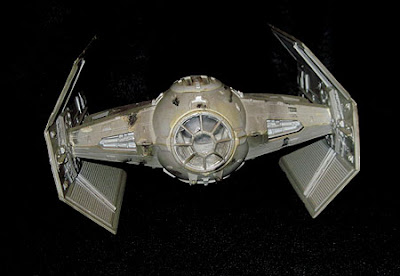 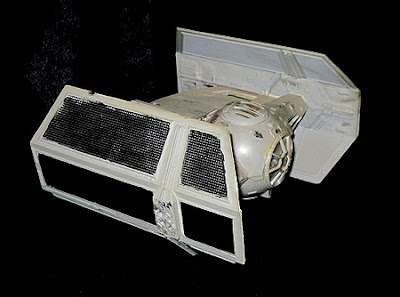 I did, however attempt to paint the solar panels on the Darth Vader TIE Fighter (anyone know why MPC never released a standard TIE Fighter? I really wanted one as a kid.), with disastrous results. Otherwise, this one's held up fairly well. The Vader figure that used to be in the cockpit is missing, and the cockpit hatch is unattached, but it's otherwise intact.

I also had that mammoth Millennium Falcon kit, with the grain-of-wheat lightbulbs, but it didn't go together properly, and in a fit of adolescent pique, I smashed it up and - if I recall correctly - set it on fire up in my grandfather's gravel pit. I think I also had the R2-D2 kit (was there a R2-D2 kit?).

Anyway, I don't know if any of you derived much from seeing these pix, but I can still remember the pride I took in putting these kits together, and thought that the fact these things still exist was worth acknowledging....
Posted by Christopher Mills at 12:04 AM