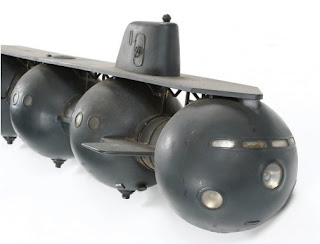 I stumbled across these photos online - auction house pix of the original special effects miniature of the submarine Cetacean from the Man From Atlantis television series. For those that might not remember, the unique, deep water submarine was originally owned by master villain Mister Schubert (Victor Buono) in the pilot film, but it somehow became the property of the Foundation for Oceanic Research in the ongoing series. I always loved this ship, and am quite struck by the evident scale; based on the windows, it looks like it would have been pretty cramped for the crew. I vaguely recall the interior sets being considerably more spacious....

I remember reading back in '77 that the underwater effects featuring the Cetacean were shot "dry," with the water and bubbles and such added in optically - unlike the submarine effects for Irwin Allen's Voyage to the Bottom of the Sea back in the 60s, which actually submerged the models in a huge water tank.

I'm fascinated by these photos - I've always been a fan and advocate of in-camera special effects work, particularly the use of miniatures. I have considerable admiration for the men and women who constructed, lit and photographed those detailed models, and am saddened that it's pretty much a lost art these days.
Posted by Christopher Mills at 5:20 AM