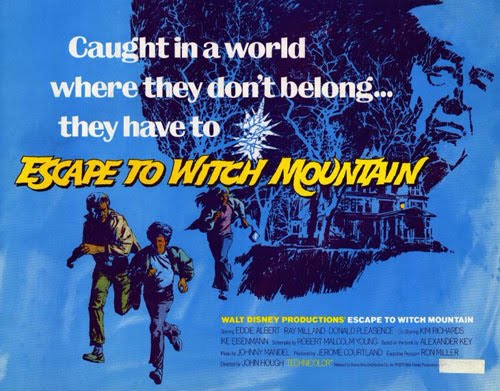 In the comments a while back, someone asked me if I was going to cover The Cat From Outer Space here; and you know - I might. As a kid in the Seventies, I saw a lot of Disney films.

Often in the summer, on nights that my dad worked the dusk-til-dawn shift at the mill, my mom would pack my sister and I, along with a paper grocery bag filled with home-popped (in oil) popcorn, into the car and take us to the Augusta Drive-In (which wasn't actually in Augusta, but Manchester) to Disney double-features. These were almost always comprised of an animated re-release backed by one of their live-action comedies or adventures. My younger sister would invariably fall asleep shortly after the second movie began, but I was a film buff even then, and I never did (much to my mom's frustration, I'm sure). Among the many flicks I made myself stay awake to watch on those late summer evenings were most of the Love Bugs, Island At The Top of the World, The Incredible Journey, The Shaggy D.A., 20,000 Leagues Under The Sea... and the original Witch Mountain movies.

They may not have been as exciting as the other sci-fi stuff I loved from television, like Star Trek and Space: 1999... but they were sci-fi, so I wanted to see them. And if they were short on laser battles, at least there was a flying saucer. For a few seconds.

When Disney released Race To Witch Mountain (which I actually rather enjoyed) to theaters last year the studio found itself required to re-release the Seventies Witch Mountain films on DVD as part of their (very blandly packaged) "Walt Disney Family Classics" line. 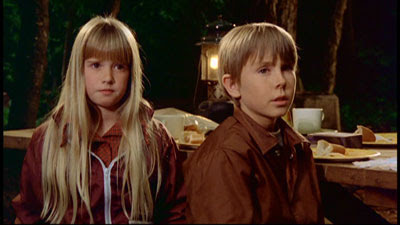 If you never saw these perennial Disney favorites before, here’s the basics: two blond pre-teen orphans with mysterious mental abilities (including telepathy and telekinesis) - Tony (Ike Eisenmann, who also starred in the 70s sci-fi series The Fantastic Journey with Roddy mcDowell) and Tia (Kim Richards, Tuff Turf) - search for the truth about their origins while trying to elude various Terran criminals intent on exploiting the kids’ psionic powers.

In the first film, Escape To Witch Mountain (1975), millionaire Ray Milland (Sire Uri in the Battlestar Galactica pilot) is after the kids, while in the second, 1978's Return From Witch Mountain, Christopher Lee and Bette Davis have their greedy hearts set on controlling Tony’s TK talents.

As directed by journeyman John Hough, both films feature primitive special effects and a certain flat, TV look, yet the stories and characters are still quite engaging, both for nostalgic adults and young children. A few years ago, I loaned the movies to my young niece and nephew, and, despite being raised on today’s flashy CGI-heavy fantasy flicks and video games, they loved the movies, watching them so many times my sister begged me to take the discs back. 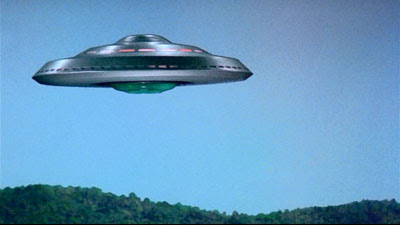 Both films have been released on DVD before, first in bonus-laden special editions back in the dawn of the DVD era, and then as a bare-bones double feature disc in 2006. These new releases include all the extras from the original release, plus all new pop-up trivia subtitles. Both films are presented in their original 1.75:1 theatrical aspect ratios and are anamorphic. Both films include commentary tracks, behind the scenes featurettes, music video montages, and other Disney-styled features. Of special interest to readers of this blog is a video montage of "Disney Sci-Fi." 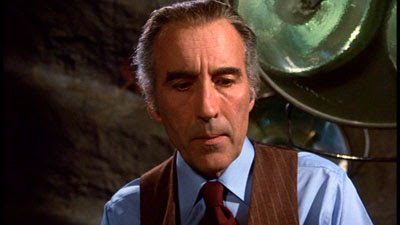 My favorite extra is on the Return disc, an interview with Christopher Lee promoting the film in Italy, where we see the veteran screen heavy demonstrating his mastery of Italian! It’s a great bit, once again confirming just how friggin' cool Lee is.

If you haven’t got these wonderful family adventure flicks already, you certainly should. They're hokey, but that's part of the charm - at least if you saw them as a kid. If you don't have that nostalgic affection for them, you may find it tough going. But when I'm in the right mood, they're fun to re-visit.
Posted by Christopher Mills at 1:45 AM