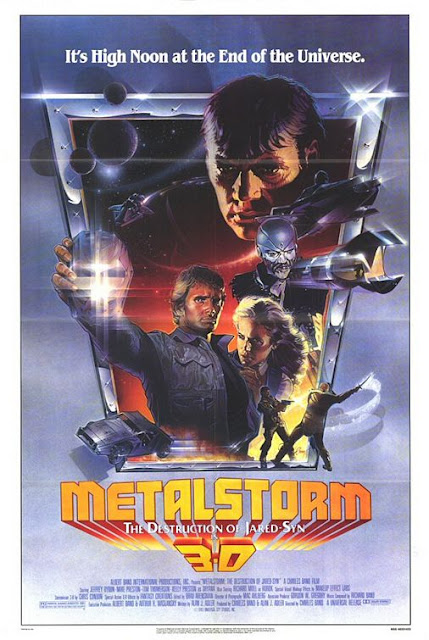 Long-desired on DVD by many cult film fans, the Charles Band (Parasite) science fiction Western, Metalstorm: The Destruction of Jared-Syn (1983) finally makes its digital disc debut from Universal. Unfortunately, those who've been anticipating this title since the beginning of the DVD era are not going to be happy.

On the desert planet Lemuria (which looks a lot like the California desert) a Ranger (or Finder, depending on the scene) called Dogen (Jeffrey Byron, wearing a leather ensemble identical to Mel Gibson's in Mad Max) rescues crystal miner Dhyana (a young Kelly Preston) after her father is slain by the evil warlord Jared-Syn (Mike Preston of The Road Warrior). They set out together to avenge her father's death; a perilous quest that brings Dogen into conflict with Syn's cyborg son Baal, hordes of angry Apaches - I mean, "Cyclopeans" - sand snakes, and masked nomads in Road Warrior-model dune buggies. Fortunately, Dogen manages to acquire a few allies along the way, including a burnt-out, alcoholic ex-Finder (or is it ex-Ranger?) named Rhodes (the great Tim Thomerson) and a noble Indian chief - dammit, "Cyclopean" chief - called Hurok (Richard Moll). 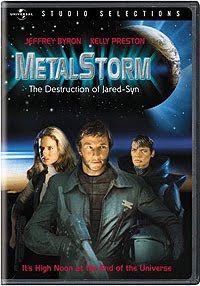 With a plot cribbed from a dozen B-Westerns, banal script, terrible acting by the leads, shoddy effects work, and laughably blatant 3D moments (lots of stuff sticking in the camera), Metalstorm cannot be called a "good" movie. Even the direction by Charles Band (Trancers, Meridian) is only barely competent, with endless -and often repeated - shots of our hero driving his space jeep around the overly familiar California locations (including Vasquez Rocks and Bronson Canyon), and a non-ending that clearly sets up a sequel that never happened. And that title, "Metalstorm?" Never explained.

Still, brother Richard Band provides the flick with a rousing score, the supporting cast - especially Thomerson and Moll - enliven their stock roles, and there's plenty of Road Warrior-inspired vehicle chases and stunts, usually ending with explosions. And there's just something comforting about its awfulness - whether it's nostalgia from when this thing played repeatedly on HBO back in the 80s or just the chutzpah of the filmmakers attempting this sort of adventure on such a meager budget, I don't know. But I can't deny that I enjoyed the 90 minutes I spent watching it.

Originally released in 3D format with a 2.35:1 'scope aspect ratio, Universal has inexplicably decided to release Metalstorm on DVD with a 1.33:1 pan & scan transfer (except for the opening credits, which are widescreen), a decision that disappointingly recreates a VHS viewing experience, right down to the lack of a chapter menu or menu of any sort. I don't get it - this is 2010, not 1997. Everything is being released widescreen these days - even stuff that wasn't shot that way (another problem altogether), since television sets are moving toward a 16x9 HD standard. Why anyone would choose to release a widescreen 'scope film in a full-frame, pan & scan edition at this point in time is a mystery -- oh, wait. It's Universal.

As to the image quality itself, it is soft (and often out of focus), lacks detail, and is littered with specks and dust. From the look of it, it may actually be the VHS source material from the 80s. Audio is 2.0 Dolby Digital. There are no supplemental features whatsoever. Not even subtitles. Oh, in addition to the shoddy transfer, the studio's chosen not to use the fantastic original poster art (seen above) on the DVD sleeve, instead opting for a bland and unimaginative Photoshop job. At least the old VHS tape box had the cool artwork.

If you're a fan of the film, and your VHS copy is no longer watchable at all, then maybe you'll want to pick up this disc. At least it's relatively cheap. But I can't recommend this to anyone else. Sure, I love this stupid movie, but Universal has once again shown their contempt for both their catalog titles and consumers. There's no excuse for this kind of half-ass product. Today's consumers expect their DVD movies to - at minimum - be presented in their proper aspect ratio.

One wishes that they'd licensed the title out to a company like Shout! Factory or Anchor Bay or Image instead....

Posted by Christopher Mills at 2:39 PM