Actually, I never saw Message From Space in the 70s, In fact, I've only seen it once, about six or seven years ago, when it aired on one of the Encore movie channels (and, man, was I surprised to see how much George Lucas seemingly cribbed from it for Empire and Jedi). But, I did want very badly to see it when I saw the advertisements in the local newspaper back in '78 (and that's one of them, below), and I also owned model kits of several of the spaceships. 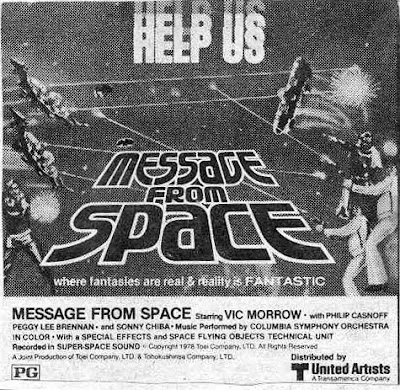 I also vaguely recall being uncommonly frustrated by an nigh-unplayable arcade game in the early 80s, that, like Dragon's Lair, used laserdisc technology and large quantities of the special effects sequences from the movie. (ADDENDUM: Yep, apparently I'm not senile quite yet - according to the IMDb, the game did exist and it was called Astron Belt. Wow.)

This Toei production was distributed in the U.S. by United Artists, so I would like to see MGM release it on R1 DVD in widescreen, but as MGM no longer seems to have any interest in its library titles, the chances of such a release seem remote...
Posted by Christopher Mills at 4:46 AM