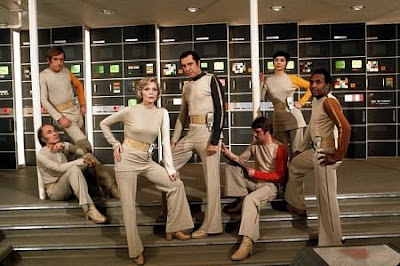 Quite often, due to the vagaries of television production, a series will make substantial changes in its format and cast as it goes along. Nowadays, producers are likely to try and explain these changes within the context of the show itself, often building whole stories and arcs around them. But back in the 1970s, these changes were just made, and loyal viewers were left to wonder just what the hell happened. Especially on science fiction shows, which had a tendency to burn out fast on the networks and often experienced game-changing behind-the-scenes shifts in personnel and dramatic mid-course re-toolings.

The "Second Season Curse" is extremely familiar to those of us that grew up during the Space: 1970 era. It was rare enough for a genre show to even get a second season, and for the few that somehow managed that feat, drastic changes were almost inevitable. Thing is, back then, the people who made these shows seemed to think that no one would really notice the changes, or wouldn't care. And, frankly, most people probably didn't.

But those of us who really followed the shows - and not just watch them casually - usually did care, and when characters disappeared without explanation, or whole formats suddenly, inexplicably changed, it left us with questions. And being fans, we wanted explanations that made sense within the context of the show itself.

For example: what ever happened to Victor Bergman? 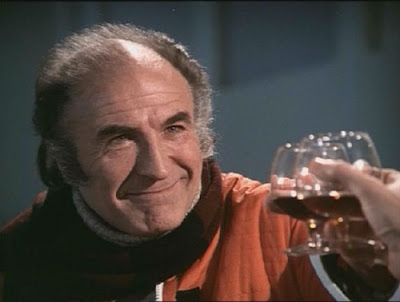 When Space: 1999 returned for its second season, there were a great many changes in look and overall tone of the show. As a kid, I could roll with the new costumes, Maya, and the newly-open (and kinda disturbing) romantic relationship between Koenig and Dr. Russell. What I couldn't just roll with - and desperately wanted an explanation of - was what happened to Victor, hot-headed Paul and creepy cyber-worshiping Kono, and why everyone was hiding in a tiny, windowless closet underground instead of running things from the gorgeous Main Mission set.

Since no one was offering said explanations, I had to make one up myself. The simplest and most logical one was that Main Mission had been destroyed (presumably in an attack by hostile aliens - on Space: 1999, there was pretty much no other kind), while the aforementioned characters were on duty. While this was logical, I still wondered why nobody ever mentioned them again or discussed their reasons for moving their control operations downstairs. And, of course, the exterior shots of Moonbase Alpha didn't exhibit any evident damage of the sort, either.

Of course, while this is among the biggest of the Space: 1999 mysteries, there are plenty of others; questions that bugged me even when I was a kid.

How did Victor Bergman always know the names of the strange new planets they encountered? (And he was always right!) 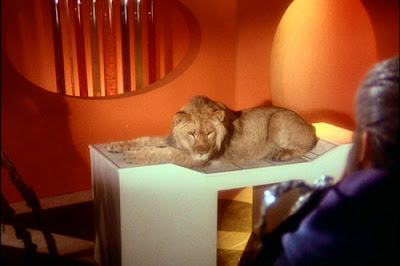 While still living on Psychon, Maya transformed herself into several Terran animals. How did she know about creatures like lions, anyway?

Why did they start wearing jackets indoors in the second year? I presume that they were keeping the temperatures in the base lower to conserve energy, but it was never actually stated on the show.

Where was Tony locked away during the first year, and why did they let him out? 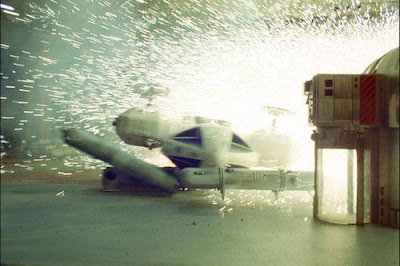 And, of course, the big one: how come they never ran out of Eagles? Those things were blowing up all the time. Surely Alpha wasn't equipped with a manufacturing plant? Hell, in "Space Warp," the rampaging Maya-beast trashed a bunch of them - and the hangar! Of course, nobody seemed to care afterward.

Is it sad that I still ponder these questions?
Posted by Christopher Mills at 1:00 AM