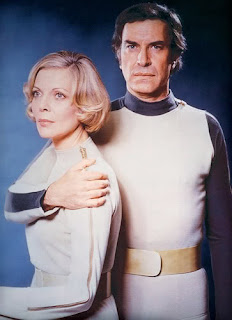 TVShowsOnDVD has more information on the forthcoming Blu-Ray edition of Space: 1999, including what bonus material will be included. Most intriguing is the rather vague "Behind-the-scenes featurettes." I wonder if this is vintage promotional material, or newly-created for this edition.

They also linked to this fascinating article on the digital restoration process that Space: 1999 has been put through for high definition. One thing I'm surprised at is that they are apparently "re-creating" the main title sequences to remove all the dirt and debris that existed in the originals:

As the main series credits shots are extremely important and the existing quality of the optically combined shots were rather poor Granada International's Controller Operations Fiona Maxwell agreed to electronically re-building the generic parts of the opening titles from the best available materials in HD.

Lots of these textless background shots still exist as small rolls of negative which were supplied as part of the re-mastering. This material was firstly graded, noise reduced and then manually cleaned-up in the same way as a standard episode to produce the master background shots. I took the opportunity to transfer these elements in both 4:3 and 16:9 widescreen ratios as there was the strong possibility that the latter would be required at some stage. Then the digital data was imported into a non-linear HD editing suite where colleague Steve Jamison went about re-building the sequence with guidance from myself as to which shots to use. Basically, the original optical captions were isolated and re-keyed at the appropriate points over the background shots making sure that things like the position and timing were matched.

No mention of whether they'll be removing wires or making any other actual changes/corrections to the source material. More at the link above.
Posted by Christopher Mills at 3:10 AM