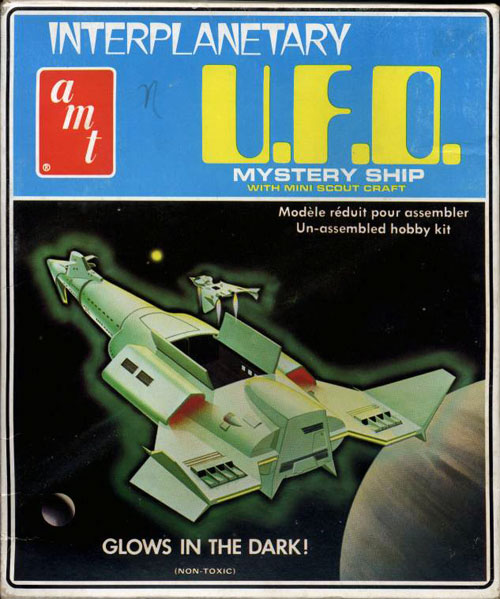 My best friend in elementary school was named Robert. He was an only child, and his parents were divorced. Needless to say, he got a lot of the toys and model kits that I desperately wanted and never had. Among them was AMT's "Interplanetary U.F.O. Mystery Ship," which was, undeniably, the coolest starship model that wasn't actually based on a TV show or movie. And it glowed in the dark.

Man, I coveted that model. AMT put its picture on the boxes of the Star Trek kits and as I watched my Enterprise nacelles droop on their pylons, or the neck of my Klingon battle cruiser sag under the weight of the command "bubble," I'd look at that picture and wish I was building that ship. What graceful lines, what implied power... and no damned pylons! (Let me be clear: I was thrilled to have those Trek models; I just wasn't a good enough model builder to assemble them correctly, and I knew it.) 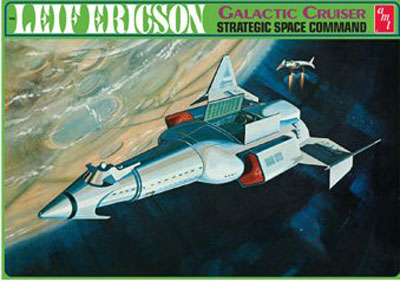 I didn't know then that it was a slightly modified re-issue of a 60's kit called the Leif Ericson Galactic Cruiser, nor that it was actually designed by Matt Jeffries, designer of Star Trek's own U.S.S. Enterprise. All I knew is that it was an awesome-looking spaceship model, and that I really wanted one of my own to build and hang from my ceiling on fishing line.

Well, now I do. Or soon will, anyway, when the kit I ordered from Round 2 Models shows up here, hopefully in time for Christmas. Thanks to my mother-in-law's holiday largesse, I was finally able to score one of these awesome model kits (or a reasonable facsimile thereof) for myself. Round 2 also offers the non-glow-in-the-dark Leif Ericson, but I wanted the one that most closely resembled the 1976 version I remember.

Of course, now comes the hard part: finding time to build it... and then, somewhere to display it when I'm done. Or I could just put it into storage with all the other unbuilt model kits I've bought over the last ten years....
Posted by Christopher Mills at 12:01 AM

Email ThisBlogThis!Share to TwitterShare to FacebookShare to Pinterest
Labels: 1976, Memories, My Models