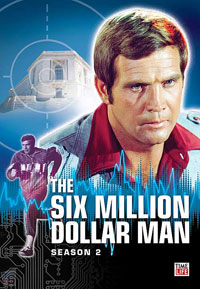 For those of us who weren't able to buy (i.e. afford) the "complete" 40-disc Six Million Dollar Man DVD set from Time-Life by mail two years ago, and have had to wait for the individual seasons to trickle out onto retailers' shelves... well, the second season is finally getting a wide release on October 2nd.

This season also includes D.C. Fontana's "Straight On 'Till Morning," which chronicles Steve's first encounter with extraterrestrials (if I recall correctly), and "The Return Of The Robot Maker," wherein the deadly Doctor Dolenz (creator of "Maskatron" - yes, I know they didn't actually call John Saxon that on the show, but that's who he was, dammit!) unleashes his latest android assassin - an exact duplicate of Oscar Goldman (Richard Anderson)! Majors' wife at the time, Farrah Fawcett-Majors, returns in Year Two as well, though playing a different character than the one she played in the first year's awesome "The Rescue Of Athena One."

According to the invaluable TV Shows On DVD website:


The separate release of The Six Million Dollar Man - Season 2 is a 6-DVD set, which includes the episodes "The Bionic Woman - Part 1" and "Part 2"; these were written by Kenneth Johnson (who was the showrunner on the spin-off show, and is also known for TV versions of The Incredible Hulk, Alien Nation and the original V mini-series). Kenny provides Audio Commentary tracks for these two episodes, and the set's extras also include "Season 2 VIPs" (a celebration of the guest stars in these 22 episodes) and the "Bionic Sound Effects" Featurette.

I've been eagerly awaiting this release, and October seems an awful long way away right now...

UPDATE/ADDENDUM: Apparently this Six Million Dollar Man set is already available at Best Buy, where it is currently an exclusive. Of course, they didn't tell anyone - at least, I never heard about it. As if I need another reason to dislike the chain. Anyway, if you want to check out your local Best Buy location, you may find a copy now. It may also be available through their website.
Posted by Christopher Mills at 1:49 AM