The most popular science fiction franchise of the first half of the Seventies was unquestionably The Planet Of The Apes, spawning five feature films, a live-action television series, an animated Saturday morning series, comic books, trading cards, action figures, et al. So it's probably no surprise that someone at 20th Century Fox got the brilliant idea in 1974 to offer all five movies at once to select movie theaters, and program them together as a "Go Ape!" movie marathon. 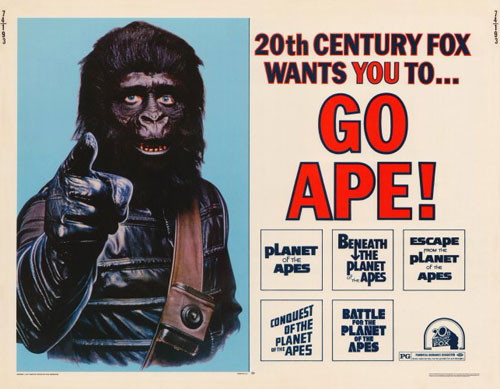 I'm not sure that I would have had the stamina to sit through all five movies in the theater as a nine year-old, but man, I sure would have loved to try! As it was, I only got to see these films as they came on network TV a few years later. Of course, nowadays I have all of them on Blu-ray disc (and, by the Lawgiver, they look grand!), but I'm sure it would have been a very different experience watching them one after another in a darkened theater, surrounded by other youthful fans...
Posted by Christopher Mills at 4:08 AM