The Other BUCK ROGERS Novels 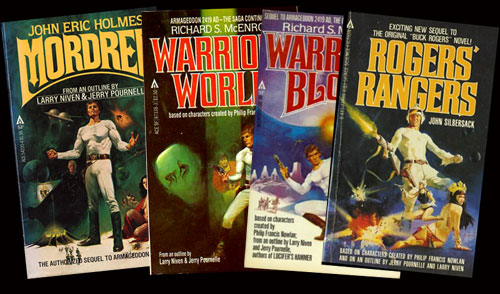 This past weekend, I finally got my hands on the two books I was missing in Ace's 1981-1983 series of Buck Rogers novels (although the name "Buck Rogers" never appears in any of them). These four books are authorized sequels to the original pulp novels Armageddon 2419 A.D. (1928) and The Airlords Of Han (1929) by Philip Francis Nowlan, and were written by various authors from an outline by SF pros Larry Niven & Jerry Pournelle. As in the original stories, the hero's name is Anthony Rogers, and the titles (and authors) were: Mordred by John Eric Holmes, Warrior's Blood and Warrior's World by Richard S. McEnroe, and Rogers' Rangers by John Silbersack.

Although published within a few months of the cancellation of the Buck Rogers In The 25th Century teleseries, there was no connection between the program and these books. In fact, I suspect they didn't use the "Buck" name, in part, to distance them from the show.This is not unlike the Flash Gordon novels published by Tempo Books around the same time - those books had no connection with the recent animated and film versions of Flash, either.

I haven't actually read any of these yet because I wanted to collect all four first. Now that I have them on the shelf, I'm hoping to get to them soon.... and further hoping that they're a lot better than the two awful Buck Rogers TV tie-in paperbacks published a couple of years before by "Addison Steele" (Richard Lupoff).
Posted by Christopher Mills at 1:03 AM