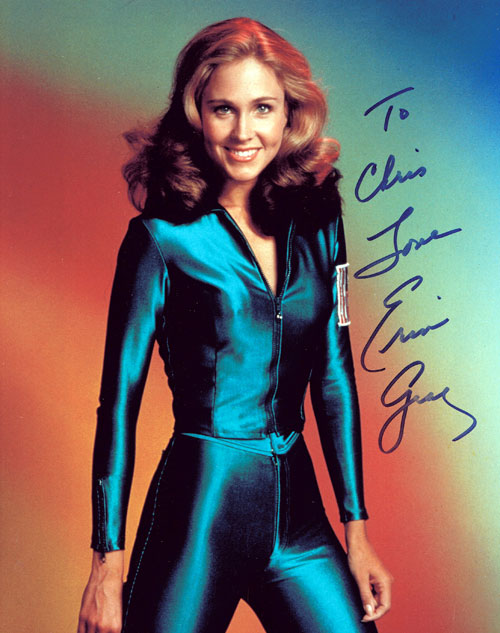 You may have noticed the "Popular Posts" list over in the right-hand sidebar of this blog. This widget tracks the most popular posts on this blog in the last 30 days. For the last twelve months - give or take a week or two where it may have dropped to number two or three - the most-viewed post on this site has been the "Erin Gray/Wilma Deering Gallery."

I can't say I'm surprised. Not only was Ms Gray's Wilma Deering stunning in shiny spandex, she was a strong, courageous, intelligent and fiercely feminine icon of the Space: 1970 era with a devastating smile and the sexiest laugh ever heard on TV. Star Kids of both genders couldn't help admire her... and that admiration and affection continues today (anyone else watch her on The Guild?). I hereby pronounce her the "Ultimate Space Babe!"

Here's wishing all Star Kids - those who grew up in the Seventies with the sci-fi shows, movies and memorabilia of the era, and those of subsequent generations who discovered this stuff years later - a very happy, safe, and space opera-filled New Year. Enjoy a toast of Saurian Brandy, Tranya or ambrosa tonight (drink responsibly - that stuff has a helluva kick), and I'll see you all here again on the 2nd.
Posted by Christopher Mills at 10:33 AM