In the Beginning: The Enterprise 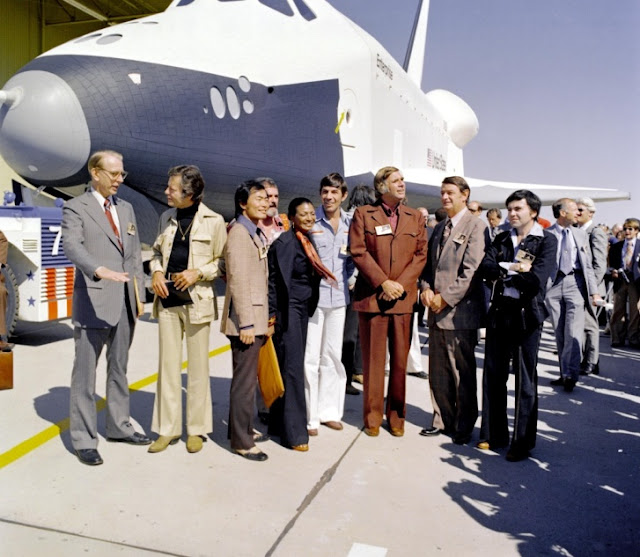 It is the end of an era, as NASA's final space shuttle mission has been completed. To commemorate, let's look back at the very first shuttle in the program - the Enterprise - and it's official unveiling on September 17th, 1976. Originally intended to be christened the Constitution, a write-in campaign to President Gerald Ford by Star Trek fans requested that the new orbiter be named after the television starship. Although Ford did not acknowledge the fan campaign officially, the president - who, during World War II, had served on the naval aircraft carrier USS Monterey, sister ship to the Navy's USS Enterprise - overrode NASA officials. Most of Star Trek's main cast, and creator Gene Roddenberry (pictured above), attended the public debut of the vessel.

Although the shuttle Enterprise was not actually equipped for spaceflight (a fact which rather irked Roddenberry, as he had hoped that the Enterprise name would be tagged to America's first genuine spaceship), having no engines nor heat shield, and was built solely as an atmospheric test vehicle, the craft was an important step forward in space exploration during a decade when that still seemed important to our future. I remember clearly the event above and took great pride at the time in being a Star Trek fan. It's a shame that as a country, we've seemed to lost our passion for exploring the final frontier....
Posted by Christopher Mills at 3:02 PM