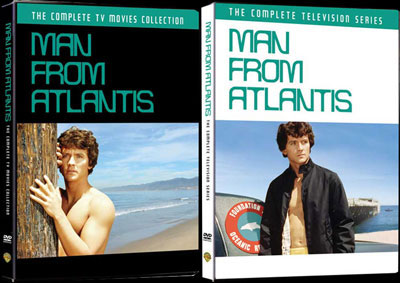 I'd heard it was "in the pipeline," and now it's been made official. The complete Man From Atlantis - television series and TV movies - is coming to DVD on July 26, as a fully remastered, MOD offering from Warner Archive. Reportedly, the pilot - which had been previously offered as a standalone title - has been pulled from the Warner Archives collection in favor of these new editions.

According TV Shows on DVD, the TV movies and the weekly series will be sold in separate packages. The  Complete TV Movies Collection will contain all four of the original 90-minute television films: Pilot, The Death Scouts, The Killer Spores, and The Disappearances.  It will retail for $24.95.

Man From Atlantis: The Complete Television Series, will contain all 13 episodes of the weekly series, newly remastered. Suggested retail price is $34.95.

I have to say: I rather like that the folks at Warner Archive - intentionally or not - designed the packaging to resemble the trade dress of the first two Man from Atlantis paperback novelizations from Dell Books back in '77! If intentional, it's a really nice homage, and if it wasn't planned that way, it's a truly cool coincidence!

Both sets can be ordered now from Warner Archives at the links above.
Posted by Christopher Mills at 6:59 PM

Email ThisBlogThis!Share to TwitterShare to FacebookShare to Pinterest
Labels: 1977, Man From Atlantis, News