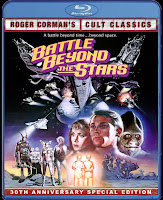 I couldn't wait until this afternoon to go and pick up the new Shout! Factory Battle Beyond The Stars and Damnation Alley special edition Blu-rays, so late last night, I headed out to my favorite place to buy vids (Bull Moose Music in Waterville, ME) and walked out with both discs at three minutes past midnight.

I have not yet had time to sit down and watch either film all the way through (although I'm probably going to spin Battle right after I finish this post), but I have given both discs a quick scan. Battle looks gorgeous. There are a few specks and scratches here and there, but it's a quantum improvement over the original New Concorde DVD from a decade or so ago (that print looked like it had been stored in a ditch). I would never have imagined that this low-budget Roger Corman space opera could ever look as good as it does here. For one thing, you can finally appreciate all the skill that the miniature crew put into designing and detailing the model spaceships. 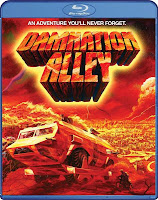 The Hephaestus Station flyby (with James Horner's homage to Jerry Goldsmith's Star Trek - TMP "V'Ger" theme) in particular was a revelation - on the old DVD the scene was so dark that you could barely make out any fine detail on the space station model at all. Now, it's crystal clear. In fact, everything - sets, costumes, etc. - looks remarkable, and I'm eager to kick back and watch the whole movie - and the supplemental featurettes.

The Damnation Alley transfer doesn't quite fare as well; the film was shot on very grainy 70s film stock, and all the optical effects that were added in post only degrade the image further. Still, it looks vastly better than any cable TV print I've seen, with much stronger colors and contrast - and it's in its correct 2.35:1 'scope aspect ratio.The extras look promising, too.

Look for full reviews shortly, both here and at my DVD Late Show site.
Posted by Christopher Mills at 2:33 AM