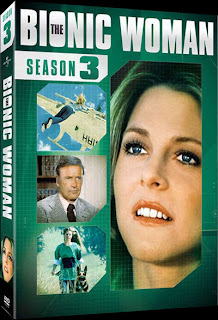 According to TV Shows On DVD, Universal Studios has announced that the third - and final - season of The Bionic Woman, starring Lindsay Wagner, will be in stores on October 4, 2011. It will be a 5-disc set priced at $39.98 SRP. The final 22 episodes are presented in full screen video, with English Dolby Digital 2.0 Stereo Sound and English subtitles. No word as yet on any supplemental features or commentaries, although the previous volumes contained both.

This was the year that the series moved from ABC to NBC, so there were no more cross-over episodes with Lee Majors' character from The Six Million Dollar Man. Jaime was instead given a new regular love interest (played by Christopher Stone) and a bionic German Shepherd named Max. Of course, Richard Anderson as Oscar Goldman and Martin Brooks as Rudy Wells both returned (playing the same characters on two different networks simultaneously - has that ever happened again?)

I recall that the episodes got a little more fantastic this season, as well; along with the return of the Fembots (as Las Vegas showgirls!), we had Helen Hunt as an alien princess, and stories revolving around some very 70s subjects like Erich von Däniken-styled "ancient astronauts" and "Pyramid power." Of course, there's all the usual undercover stuff and spy plots, too.

I've really enjoyed re-watching the first two seasons on DVD, and am looking forward to completing the series. Now if only Time-Life would release the rest of The Six Million Dollar Man in affordable, individual season sets, I'd be a very happy man.
Posted by Christopher Mills at 3:50 PM