It's not a good movie, by any means, but I actually have a warm spot in my heart (and soft spot in my head, obviously) for Corman and David Carradine's psuedo-follow-up to Death Race 2000. I first saw this movie on the CBS Late Movie, probably around 79 or 80, and hey, as a sci-fi kid, I dug the cool laser guns (I still really like the animated disintegration effects) and shiny plastic swords, not to mention the sexy Claudia Jennings (even if the network cut her nude scenes). When I picked up the New Concorde DVD about ten years ago, I discovered that I still dug the movie as an adult. 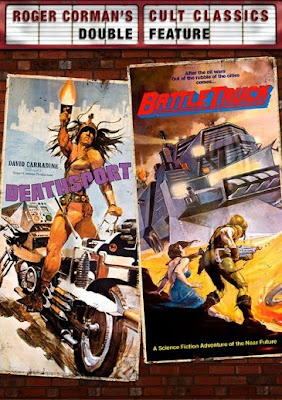 Carradine and Jennings both appear to be completely stoned during the entire film (and, from what I've heard of the production, they probably were) and the dialogue is stunningly ludicrous/pretentious - but there's some genuinely great motorcycle stuntwork in the movie, tons of huge explosions, and it's fun to see the familiar Vasquez Rocks/Bronson Canyon/Fox Ranch locations once again representing a post-Apocalyptic milieu. I like the whole "Range Guides" concept (including the plastic swords!), the motorcycle Death Machines are admittedly clunky but still kinda cool (and they sound like TIE Fighters!), and unlike Death Race 2000 (which is by far the superior movie), Deathsport has ray guns!

This is another of the "Roger Corman Cult Classics" that Shout! Factory has coming up next month on a double-feature DVD (paired with Battletruck, which I've never seen, but sure sounds like a good companion feature), and I'm actually looking forward to upgrading from my old disc. I'm hoping that Shout! will have access to a better print and will correctly matte it to its theatrical widescreen aspect ratio. It's supposed to street on August 3rd, and can be preordered from Amazon here: Death Sport / Battle Truck (Roger Corman's Cult Classics)